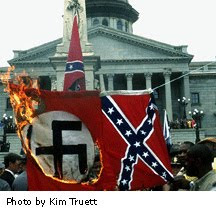 The Governor of Virginia's Racist Proclaimation (link)
I made a valiant effort to stop fuming and foaming over the callous, despicable political move by Bob McDonnell, Governor of Virginia. This is a direct affront to all people of color, indeed all people, in his state and our country. It is a further affront to the truly brave people who fought to preserve the Union and dismantle the repugnant institution of slavery.

I urge you to write to McDonnell and explain the revulsion we should all feel at such a proclamation. Here is the "contact the governor" page link, and here is what I wrote to this loathsome human being:


Dear Governor:
We are thinking here in New York of proclaiming a Traitorous Actions of the Confederate Fiends Month. This would include informing our local school children and others of how a group of hideously immoral people wantonly attacked their elected government, killed hundred of thousands of people needlessly - all in order to keep millions of human beings in permanent bondage.

There is no glory in what the soldiers of the South did. Their heroism was misguided. Their memory is forever tarnished. They brought destruction and disgrace upon their homes and families fighting for an ugly, inhuman cause. You forever have associated yourself with the worst in the human spirit. I am sending today a check for $100 to the Virginia Democratic Party to help begin the process of removing you from office in the fastest legal way possible. I will also urge every acquaintance, friend and relative I have never to spend a nickel in Virginia until this racist declaration is reversed. What an awful thing for you to have done.You should be ashamed of yourself.
...
Posted by RDL at 4:37 PM