HuffPo has so much to offer us, but an article run in today's business section can only be described as hysterical. View it here.  It describes the dire consequences of the decline of the industrial side of the U.S. economy.

Additionally, U.S. industrial output has grown every year since 1990 (at least) even through the current recession. 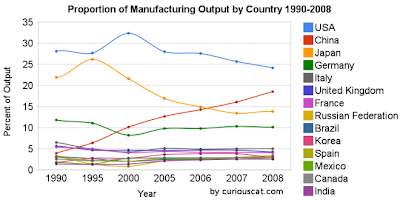 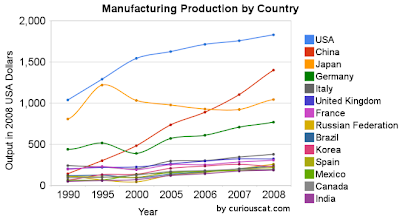 Industry is not going away. What will go away are the number of jobs provided in the manufacturing sector. As advanced economies automate and robotize their industrial plants, fewer and fewer people will be needed to work in them. This is roughly analogous to the 19th and 20th century decline in the number of farm workers or number of deck hands needed to move a given amount of freight tonnage on a ship across an ocean. (Think labor intensive sailing ships versus the mega cargo ships of today that can be operated with a handful of crew members.)

And consider this from MSNBC: "Whereas a Chinese industrial worker produces $12,642 worth of output... in the United States, a manufacturing employee produced an unprecedented $104,606 of value in 2005."

China's growth has been meteoric, no doubt. But, with 1.6 billion people, it's output is relatively puny on a population basis, and by default much of what China produces is consumed at home. (Japan and Germany lead both America and China when it comes to this population-to-manufacturing ratio. Although it should be noted that the manufacturing fraction of the U.S. economy is much smaller than either China, Japan or Germany, which means our economy is much more diverse.)

The United States must stop looking at China's new-found, if narrowly distributed, prosperity not strictly in Yin terms, but in Yang terms as well. It is a new, vast market to conquer and we have many, many goods (and services) China wants and needs.

Obviously, our government needs to be more vigilant about China's unfair trade practices - the renminbi needs to float, for starters - and we must be vigilant about the constant influx of shabby products the Chinese send here.

Reciprocity is the key word and Washington has to step up on the trade issues, even in the midst of all the other wailing and gnashing of teeth rising above the Capitol.

While we certainly have room for expanding our manufacturing capabilities, now is not the time to be acting as if we're on an industrial-strength bad acid trip. Better to ask ourselves what new industries and markets lend opportunity for expansion. Green Tech? Transportation?

Lack of progressivism hurts us in business as well as social achievement.
Posted by RDL at 3:42 PM