Racial History of Arizona, Part One: The 19th and Early 20th Century 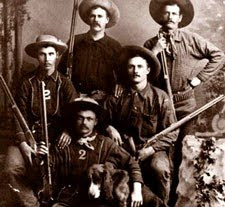 The Arizona Rangers
The "Driving While Mexican" law enacted last week in Arizona is not some isolated incident, a case of good people gone bad over a frustrating circumstance.
Indeed, it is part of Arizona's long, complex racial history, dating back to shortly after the Civil war when copper and silver mines were opening in the Gila Mountains, among other places. At the time, the thinly populated region could have been aptly named Mex-Arizona, the border being legalized on paper, but for all intents and purposes fluid and porous.
The first white reaction came in the 1870s when, fresh off the completeion of the Transcontinental Railroad project, and after building a primary railroad network across the then-territory, Chinese laborers drifted into metals mining work. The Chinese men fell into competition with Mexican workers for whom the Arizona-Mexico border was imaginary at best.
As long as the Chinese remained in competition with Mexican workers only, their presence provoked little concern among news editors and representatives of vocal white groups. But it was not long before the Chinese began to drift from the railroads into mining work. Henry Lesinsky (pioneer of Arizona, a Prussian of Jewish descent) touched upon this matter publicly, announcing that if his Longfellow Copper Mines employed any Chinese at all, “it would be at work which neither white men nor Mexicans would accept.”

Lesinsky did not want to be responsible for starting a “Mongolian invasion of that territory.” Instead, the Chinese would be put to work in the hills burning and transporting charcoal for the furnaces over such rough country that “even Mexicans cannot be got to carry anything over it.” Not more than seventy would be hired, and these would work separately from the “225 to 275 white men and Mexicans, who got on very well together.” A week later the Silver City Herald reported that “some fifty Chinamen have arrived at Clifton, Arizona, and will be put to work in the mines and furnaces.”
"Vagabondage and crime" were said to be the direct result of this immigration, local politicians were challenged to define their positions on the issue publicly, and the Immigration Act of July 1, 1879, then being formulated, was cited as evidence of federal recognition of the seriousness of the Chinese question. “The Chinese must go!” became the symbolic cry that greeted Southern Pacific foremen when they arrived with their crews at Maricopa Station in January, 1880, after a six-months interruption of the work. The Chinese soon went, some 3/4ths of them into the copper camps.
By the early 1900s,  Mexican laborers predominated in the mines, most of them brought by enganchadores, or "hookers," recruiters who preferred men from the interior of Mexico rather than border-men.
According to the editor of the Bisbee Daily Review, thousands of Mexicans were brought into Arizona during 1901 to work on the railroads and in the mines. The inflow was so great at this time that he questioned the accuracy of the 1900 census in setting Arizona’s total population at 122,212. “There is little doubt, despite these official figures,” he said, “that the territory has a bona fide [permanent] population of about 140,000.” No immigration statistics were kept at this time, but contemporary estimates claimed that between 60,000 and 100,000 Mexicans crossed the border annually.
This was the beginning of the trans-national labor issue we see now exploding in Arizona's profiling law today. (Of course, ranch and farming workers crossed easily in early days, but numbers were insignificant.)
Eventually, Mexican laborers ran smack up against unionized whites in the mines, the whites believing that low-wage Mexican workers dragged down the wages of their members, high-skill workers. In actuality, the price of copper had tumbled in the first decade of the 20th century.
On March 21, 1901, during Governor Nathan O. Murphy’s last year in office, the legislature passed a bill enabling the creation of a special body called the Arizona Rangers. Their personnel, whose identification was to be kept as secret as possible “for strategic purposes,” were authorized to command the services of cattlemen and law officers when necessary. Formed originally to patrol the border and prevent cattle rustling, they were often used by mine owners to suppress strikes. Having formed the body as one of his last official acts, Murphy, himself a mine owner, resigned to attend to business affairs, forcing his successor, Governor Alexander O. Brodie, to take office prematurely in July 1, 1902. The next year the union won a round. When the twenty-second legislature met on January 19, 1903, says historian James McClintock, they passed an act “directed against the companies employing Mexican and contract labor… prohibiting more than eight hours of labor on underground work in the mines.” While the eight-hour law constituted a major victory for [white] union men in their efforts toward better working conditions, their principal satisfaction came in seeing an effective blow delivered to mine operators who sought to employ alien Mexicans whenever possible because Mexicans would submit to working ten to twelve hours a day at a wage that undercut the union scale by almost fifty percent.
A strike, called the Clifton Strike, ensued and toward its latter stages, only Mexican laborers were left, and they insisted on organizing for better wages and shorter hours. The strike, which may have ended in bloodshed, (both sides were heavily armed), was instead ended by a catastrophic rainstorm that literally washed away the Mexican workers shantytowns.
The Clifton strike was the opening shot of a long series of skirmishes between labor and management with Mexican workers as a major issue. Because of increased cooperative efforts, the wages of Mexican workers began to rise as the years went on. By the end of the Territorial period, the momentum of economic necessity showed Anglo and Mexican workmen that cooperation was the better course. There was also a significant decline in anti-Mexicanism. The alien labor issue, however, continued to be a problem. In fact, really serious troubles were just beginning. Contract systems for alien Mexican labor were established during both World Wars and the government ultimately resigned itself to legalizing what it could not prohibit.
This sat well with white Arizonans as long as Mexican workers were the only ones willing or available to work mine, road and railroad-building, and other menial jobs. Mexican women were employed as household help, or as menials in laundries, food establishments and so forth.
As the white population of Arizona grew, however, from 1900 through the 1950s and the economy diversified, whites saw their right to seek employment as substantially more crucialt than the old, cross-border model.
Posted by RDL at 9:45 AM