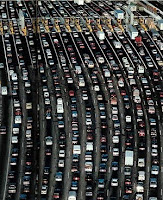 The best way to get ourselves off of the heroin of oil we're hooked on is to figure out alternative energy sources and to conserve now.

Is the opening of offshore territories the best way to begin?

In spirit, no. In reality, yes.

The President's overall strategy seems a bit obscure at the moment. If I were a betting man, though, I would bet on the opening of offshore drilling as a strategy to either a) draw in Republican and conservative Democratic fence-sitters for a larger energy bill, or b) set up a similar scenario as the one we witnessed with health care reform, where a bill is pushed through without right wing help because, with a clearer conscience, we can say "we tried and they didn't respond."

The opening of the off shore areas to bidding will not begin until 2012. The bidding itself will be met by challenges both from groups like the NRDC and the EDF, and by state governments of the affected areas. Then, if the challenges to bidding fail, new geological surveys will proceed. Once oil is found in economically useful amounts, permitting will begin - and be challenged anew. One can expect this process to take another 7 to 10 years.

This will give ample time to stop this madness in its tracks, no matter how cumbersome or distasteful the process. Meanwhile, hopefully, some version of cap and trade, and the development of real alternative energy sources can be implemented.

However, as one can imagine, the best way to do something right now is to conserve now on energy use.

Start planning day to day driving trips so you are multi-tasking. (No separate trips to pick up milk, pick up the dry cleaning, grabbing the kids from school, etc.) Drive at 55. Go easy on the acceleration. Make your next car the most economical on the market you can afford. Car pool. If everyone simply car-pooled when taking kids to school, we'd save millions and millions of gallons of gas every day. Take public transportation whenever possible.

Immediately convert all light bulbs to compact flourescents. Insulate your home for both heating and cooling savings. Lower the thermostat for heating, raise it for air conditioning. Be Draconian in turning off lights and lowering appliance settings. (More than 90% of American homes have their refrigerators and freezers set too high, for instance.) We can all save up to 15% of our personal energy consumption just by taking such steps, creating far more net change than any domestic drilling or digging can ever provide.