The Financial Fire Next Time 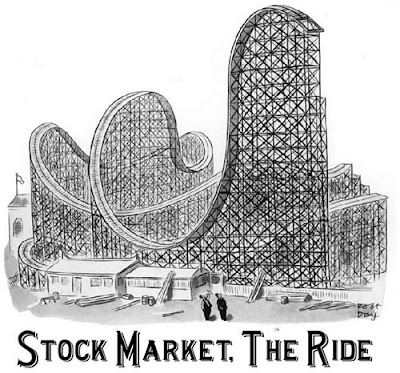 Congress is preparing us to fight the last financial war, the one based on the bundling, manipulating and trading of derivatives. But the next financial war will be about something very different.

What might it be? Look to the hottest and/or emerging sectors of the economy.

The Internet is still an under-ripe crop; the green economy is a nascent opportunity for the pirates; cap and trade scenarios are the perfect imaginary commodities; and don't forget our old "frenemy," oil. Maybe even water futures. How about bonds, the stodgy investment? I'd also keep an eye on Baby Boomer pensions and annuities; the biggest pot of gold in the private world is the $27 trillion dollars in assets held by American Boomers.

No one knows exactly what the next market bubble or grand maneuver will be. But we can be sure one will come as soon as regular companies, recovering now at a fevered pace, slow down and the big money looks for yields that can be conjured out of thin-air. (E.g., Ford stock has gone from roughly $1.50 to around $14 in the last 2 years. Chances are it's not going to $28 soon. Where can the hungry investor double his money now?)

And the crisis will absolutely, positively entail over-leveraging in some new, nefarious way.The mechanism is being assembled like a top secret rocket as you read.

Leverage was what the 1929 Crash was all about. In fact the entire Roaring 20's roared and vamped on cheap, unbridled credit. Big investors bid up the stocks of regular companies then colluded with banks to lend money so smaller and smaller investors could jump on the band wagon until corporate stock prices were in stratospheric ranges. At one point, AT&T was selling for $304 per share. That's about $6000 per share in 2010 money. And guess who bought at $290 or thereabouts per share? The johnny-come-latelys. Small time suckers, farmers, credit unions, and weak-economy foreign governments looking to cash in. Only a few weeks later, AT&T sold for $197, then eventually fell to the $60 range.

In the 20s, too, there was something called the Florida Land Boom. Again, some worthwhile but mostly worthless land in the Miami area was sold to investors up north with banks exhibiting nary a care about the buyers' financial positions. Parcels that went for $3000 in 1922 were selling for $60,000 in 1926. All on borrowed money, both buyers and their banks becoming overleveraged in the process. So when the music stopped... all fall down.

We've seen this before too many times. The Savings and Loan crisis, the Hunt Brothers' attempt to corner the silver market in the 80s, the Internet Bubble. Thousands of people saw it in the eyes of Bernie Madoff. Going back further, there were the South Sea Bubble in the early 1700s and Tulipmania in 1637. Everyone wants in on the big casino. And everyone gets their freak on when the casino slams them.

So, what can the government actually do? What laws can be passed?

1) Highly-leveraged paper has to be limited to some rational share of a financial company's investment portfolio. We know now that margin buying in the 20s was part of a larger delirium. But buying a purely speculative instrument for 10% down (margin buying) was utter madness.

Imagine a friend saying to you, "Lend me $5,000 so I can go to Vegas," when in fact she only had $500 to her name. You'd call an asylum. But in our public market speculations we lend that $5,000 all the time, the theory being that if I lend enough bundles of 5 grand, one of my friends will come home a millionaire and I cover my bad investments plus make a big belly profit. But when none of the friends come home, I'm in big trouble.

Our housing bubble was more complex, but it operated on the same principle. People with poor credit went to banks to borrow money to buy houses for which the banks didn't have money to underwrite mortgages so the banks went to "investment banks" or insurance companies which handed over money and then re-sold the bundled (worthless) paper. As the number of institutions upon which those bundles could be fobbed off on dwindled, the interest rates on the original mortgages had to climb so the banks could cover expenses. All well and good when the economy rode high, but once these marginal house buyers began losing their jobs their variable rates went up, and up and...

2) Absolute transparency has to be maintained, not just on the consumer level, but the institutional level. J.P. Morgan-Chase has to know that it shouldn't be underwriting some other institution that is leveraged to the max. If there is absolute transparency, no individual or institution can make the childish argument, "I wouldn't have done it if I could have helped it."

3) Criminalize certain behaviors in the world of finance. While what a charlatan like Madoff did clearly merits hard time in the slammer, how different is what he did from what the likes of Goldman's Blankfein, Citi's Charlie Prince, Stanley O’Neal of Merril-Lynch, et al?

The threat of 20 to 40 years behind bars and loss of all but subsistence assets for their families should scare almost anyone into honesty.

Even now, time bombs are ticking that have been planted by the financial sector terrorists.