The swirl of history was in an uproar 40 years ago this month.

Earth Day was born out of a populist movement that articulated the burgeoning unease with the severe damage being done to the planet. The damage wouldn't stop merely because an enormous conglomeration of idealistic, mostly young people decided enough was enough. There is a lot of work to be done yet. But much positive change grew out of those first demonstrations of love for what, to this point, is the only home we have.

On April 22nd of 1970, something else was going on in the land. Republican President Richard Nixon's administration had been conducting a secret war in Cambodia that was finally coming to light. Twelve days later, 4 students - innocent bystanders it should be remembered - were murdered by members of the Ohio National Guard on the Kent State University campus.

Lost in this toxic brew of anti-Vietnam War politics and enmity between young and old, were not just the warm and fuzzy emotions that the first Earth Day engendered but the tangible effects of the early environmental movement on legislative change:

The Clean Air Act of 1970, which, among other things allowed for citizen suits against polluters. (In 1970, cars emitted 20 x more pollutants than they do today!)

The 1973 Endangered Species Act which provides for the conservation of ecosystems upon which threatened and endangered species of fish, wildlife, and plants depend;

The Resource Conservation and Recovery Act of 1976 which gives the EPA authority to control the generation, transportation, treatment, storage and disposal of hazardous waste.

The 1984 Federal Hazardous and Solid Waste Amendments to the above which focused on waste minimization and phased out land disposal of hazardous waste. Some of the other mandates of this law included increased enforcement authority for EPA, more stringent hazardous waste management standards, and a comprehensive underground storage tank program.

The 1986 amendments which enable the EPA to address environmental problems that could result from underground tanks storing petroleum and other hazardous substances.

The Clean Air Act Amendments of 1990, which mandate the elimination of lead from all U.S. motor fuel by 1996. This represented the final step in a gradual reduction of lead in gasoline that had started in the early 1970s.

Along with environmentally friendly legislation, recycling went from an occasional fund-raising event to municipally-provided pick-up.

The same people who struggled against the inhumanity of the Vietnam War, the mass psychopathy of segregation, and the oppression of women, also began the battle for planet earth. This is what they looked like on the steps of the Philadelphia Museum of Art on the first Earth Day: 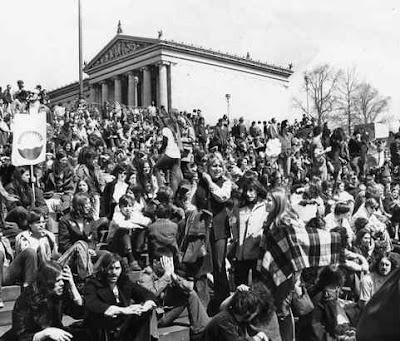 How did the kids get there? One can argue that it began with Rachel Carson's seminal work on the DDT poisoning of nature, Silent Spring, but you can also look back farther at the legendary efforts of Teddy Roosevelt to preserve the beauty of the American West; the 6 million acre amalgamation of land in New York State's Adirondack Park in the second half of the 19th century through the 20th; and you can also look even deeper into the 18th and early 19th century American Romantic notions of our continent as a sort of new Eden as typified in the Hudson River School of Painting.

Closer to the time of the first Earth Day there were eccentrics (and I use the word in its most complimentary sense) like Stewart Brand, impresario of The Whole Earth Catalog. (An electronic version its first edition can be viewed by clicking here.) The catalog is hard to describe, being part tools and alternative household living catalog, part work of art, and part philosophy anthology. One of its famous mottoes about the Earth was "We can't put it together... it is together," a semiotics-driven declaration that intimated that while we can't put the Earth together, we can certainly tear it apart.

Brand was emblematic of his time. In the mid 1960s, he was associated with author Ken Kesey and the "The Merry Pranksters" and in San Francisco with his partner Zach Stewart, Brand produced the Trips Festival, an early effort involving rock music and light shows, and one of the first venues in which the Grateful Dead performed. Tom Wolfe describes Brand in the beginning of his book, The Electric Kool-Aid Acid Test as "a thin blond guy with a blazing disk on his forehead too, and a whole necktie made of Indian beads. No shirt, however, just an Indian bead necktie on bare skin and a white butcher's coat with medals from the King of Sweden on it."


"Time it was and what a time it was, a time of innocence, a time of confidences..."
- Paul Simon
Many of the founders of Earth Day wring their hands today at the corporatism that has crept into the celebrations. Pepsi, Google, all the usual suspects have their fork in the pie. “This ridiculous perverted marketing has cheapened the concept of what is really green,” said Hayes, who was national coordinator of the first Earth Day and is returning to organize this year’s activities in Washington. “It is tragic.”

I'm not so sure. When it comes to the most crucial decisions we have to make to save the Earth, we want everyone on board. Humans will always consume products. The big question remains, "How can we do so in a planet-friendly way?" Individuals, companies and goverment have to come to a solid understanding about what's best for all of us. Although there are many things an individual can do inependently.

Use less, use natural and organic products, re-use what you already have, recycle that which you can't re-use. Turn the lights out. Get out of the car and walk, ride, or use public transportation. Control your thermostat, insulate your house, buy local, start a garden if you can.

To return briefly to what this blog is all about: don't think for a moment that the right wing will embrace environmentalism in any way, shape or form. Theirs is to consume and leave the mess for subsequent times.

Coming up consistently with good, practicable solutions is the answer to their hysterically pro-business, pro-consumer posture. Someone who carries an automatic rifle to a political rally is not going gently into that good night.

Locally, I want to draw attention to New York City's Million Trees initiative. I was skeptical at first, but I decided to try it. The site tells you that if you want trees planted on your street or any street, all you have to do is call 311. It works!

Last year, I spied out about 80 empty tree pits in my Hamilton Heights neighborhood and called 311. They said it would take till this spring. Inside I was saying "Sure, sure."

Lo and behold, late in March the excavators were re-opening the holes and by early April the new trees - about 15 feet tall some of them - were in place. Now they are in full leaf.