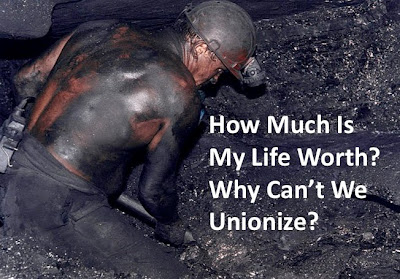 We know that coal is not an unequivocal good for our country or world, the way it is mined and burned now. Nor are unions an undiluted good for either their workers or the overall economy.

Coal is with us, however, for better or worse, workers are with us, and unions are still the best way yet to be conceived to protect working people's health, safety, security and wages.

The United Mine Workers Union has squandered its patrimony by not standing up more firmly to the mining companies. Is it better to die in a pit 500 feet in the ground like trapped rats burned and gassed to death, or to stand up and organize, resist and if necessary shed blood for what is fair and right? UMW: look to your history for inspiration.

The tragedy that is unfolding in the Massey Energy Company's Upper Big Branch mine in Montcoal, West Virginia, dramatizes what happens at a non-union facility when the diabolical neglect of a mining company and government indifference intersect.

Upper Big Branch was fined three times in March alone because of dangerous methane and CO2 levels. Workers have to report problems to authorities anonymously because the Massey Energy Company, the largest mining company in central Appalachia, has bitterly resisted unionization and persecutes any worker who speaks out on crucial issues. Federal and state governments are reactive rather than pro-active concerning safety issues and are essentially AWOL when it comes to environmental damage until the evidence is sickeningly overwhelming. Prevention is worth - oh, a few million pounds of cure.

In 2008 Massey paid a $20 million fine to the EPA for violating water pollution permit limits at its mines and plants 4,520 times between January 2000 and December 2006. Massey had polluted and clogged hundreds of streams and rivers in Kentucky and West Virginia by releasing countless thousands of tons of metals, sediments and acid mine drainage into those states' waterways. It took 8 years from the first incident to the moment the fine was leveled.

Massey is a company hell-bent on creating environmental and human disasters. Massey CEO Don Blankenship is unapologetic: “Violations are unfortunately a normal part of the mining process,” he said. (Translation: we know there are laws but we don't care and violate them anyway because our profits are more important than people or the environment.)

Due primarily to Blankenship's efforts, only one-quarter of mine workers in Appalachian states are unionized, down from 95% less than 30 years ago. This has bred more environmental and human catastrophe at a time when, in fact, more and better safety technologies than ever before are available.

In addition, Blankenship has laid out a plot to pollute West Virginia's political process with campaign contributions that dwarf anything honest opponents can muster. When Massey lost a $50 million dollar jury award to another company that Massey had forced out of business, Blankenship set to work to dismantle plaintiff-friendly courts in West Virginia.

In 2004 Blankenship gave $3.5 million to back the successful candidacy of obscure Republican Brent Benjamin for a seat on the West Virginia Supreme Court. That's how important putting morally corrupt judges in place is to Massey. (Blankenship’s gargantuan contribution inspired the U.S. Supreme Court to order Benjamin to step down from an appeal involving Massey.)

All this in a state that consistently ranks 48th or 49th in per capita GDP nationally. (Per capita income for all West Virginians is around $30K. Blankenship's personal income is approximately $34 million per year, 1100 times larger than the average. Is it any wonder he's padding the pockets of friendly, right wing politicians?)

Do you hear that desperate sound coming from underground? It's the extremist right leaning madness that's taken a deat hold on one of our poorest states, which happens also to be our most environmentally damaged state.

The United Mine Workers Union needs to look to its militant roots and stop serving as the facilitator for Blankenship and others like him. The UMW membership needs to stop sitting on their hands and raise their fists in the air.
...
Posted by RDL at 12:12 PM