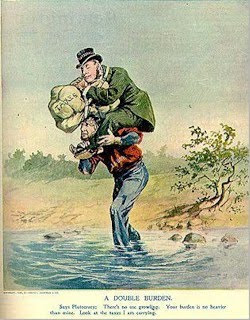 Says Plutocracy: There's no growling. Your burden is no
heavier than mine. Look at the taxes I am carrying.
Good Friday. A time to ponder morality, social justice, sacrifice and the very large questions.
We read yesterday that the top 25 hedge fund managers averaged $1 billion each in income last year. Let us begrudge no one being smart or lucky. However, let us begrudge their not paying the appropriate amount of America's tax burden.
The inequity goes beyond those top 25, who neither make a product, innovate new technologies, or provide some strategic service to society.
Ponder this: The nation’s richest 270,000 Americans make as much money as the bottom 160 million. Of course, this trend has greatly accelerated during the Great Recession, although it was already speeding up throughout the presidency of George W. Bush.
In reality, this is a broad historical trend that began around 1975 and continues today. US real income per family grew at a modest 1.2% annual rate from 1976 to 2007. However, when excluding the top 1% of earners, the average real income of the bottom 99% grew at an annual rate of only 0.6% which implies that the top 1% captured 58% of real economic growth per family during that period.(1)
This means that if a typical wage earner was earning $19,000 in 1976, today he or she would be making about $40,000. On top of this, the overall tax burden - i.e., federal, state, county and town property, and sales taxes - has actually expanded by over 15% for the salaried and hourly paid worker over the last 35 years. (The only area of significant tax reduction has been on the federal level; but, while the bottom 99% saw some benefit, the tax cuts overwhelmingly favored the rich.)
Meanwhile, the overall tax burden for the top 10% of our nation's earners has diminished to practically zero. (Warren Buffet's famous observation that he pays less in taxes than does his secretary comes to mind.) The mega-rich only pay "unavoidable taxes" - property, school, and sales taxes. And, since their contributions to Social Security, unemployment taxes, workman's comp fees, etc., are capped, their featherweight burden is even less than we might reasonably expect.
The right wing would have us think that this is a natural and right state of affairs. In fact, it is wrecking our lives and economy. It is destroying our national spirit and unity, as well. Where is the logic or justice in taxing non-labor earning virtually nothing while overtaxing the broad 99% who work for a salary by using their hands, heads and hearts? Why is only one sliver of the economy engaged in "trickle down" while the rest of us wait for our few drops of the trickle to reach them? How did we end up a nation of Oliver Twists?
Contrary to the right wing plutocratic view, this compression does not accord with our post-Civil War history at all. Even in eras that gave us Henry Fords and John D. Rockefellers, their overall share of the wealth was much less than is that of today's mega-rich. Why? Once we erase the exaggerated schoolbook images of the robber barons on one hand and squalid slums on the other, we can bring into focus an enormous middle class. More crucially, the path into the middle class life was clear for most Americans. (The destruction of the [since rebuilding] fragile black middle class for instance, was largely a product of the 1960s, 70s and 80s, just the period when income disparity rates exploded.)
It isn't wise to execute a "soak the rich" tactic, although emotionally that is damned appealing. The rich, and especially the mega-rich, need to contribute their 20% of the tax burden just as everyone else does. And, the cap on Social Security and other social program taxes needs to be lifted.
When you look through current college history or social studies texts, you will see a list of societies described as plutocracies, societies ruled by a wealthy elite who dominate government. Ancient Athens and Carthage are on the list. The trading cities of Venice, Pisa, Florence and Genoa are there, as are the zaibatsu of pre-World War II Japan.
The two contemporary examples given to college students?
The Russian Federation and The United States of America.
(1) Top Incomes in the Long Run of History
Anthony B. Atkinson, Nuffield College, Oxford and London School of Economics
Thomas Piketty, Paris School of Economics
Emmanuel Saez, UC Berkeley
Posted by RDL at 11:42 AM