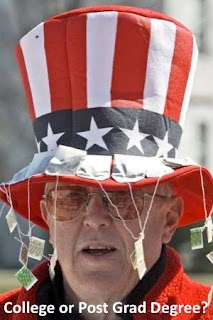 OK. We already know there are lies, damn lies and statistics. But this week's NY Times/CBS Poll of people who consider themselves part of the Tea Bag movement has generated some particularly bizarre contradictions.

However, the summary also notes, "Although the Constitution requires American presidents to be natural born citizens, as many as 30% of Tea Partiers say they think President Obama was born in another country and another 29% aren't sure." That's a total of 59% in the doubter column.

What colleges and grad schools did these people attend? Has a Tea Bag University been set up without our knowing it?

I can't think of even one post graduate degree holder I know who doesn't believe, or doesn't know if, the President is a natural born citizen. I did know one undergraduate degree holder who had doubts, but a few beers together and the threat of taking a belt sander to his face disabused him of the notion.

62% of Tea Party Activists believe the economy is getting worse in spite of the fact that the stock market has recovered almost 4,500 points since Obama has been in office. And employment figures, while unsteady, are on a definite up trend.

32% believe that violent action against the government is justified. (Maybe we should check THEIR birth certificates. Sound like enemy aliens to me.)

77% get their TV political news from Fox.

What person with a college or graduate degree could possibly name Fox as his or her primary news source? It's like naming Homer Simpson your favorite philosopher, except even Homer is right occasionally.

Of course, a vast majority of the Tea Baggers are "older" Americans, so one must take into account the possibility that their education ceased 50 years ago, or their brains have actually been eroded from all that tube time with Fox.

In Animal House, Flounder is admonished that "Fat, drunk and stupid is no way to go through life."

To the Tea Baggers: "Misinformed, angry and scared is no way to spend your twilight years."