Fed Up With The Founders 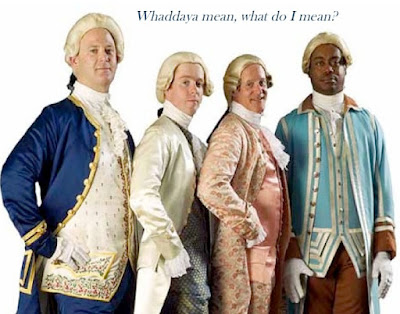 I'm fed up with the freakin' Founding Fathers. Jefferson, Madison... the whole bunch of them. (Well, maybe not Franklin, a refreshingly urbane, diplomatic fellow with a wicked sense of humor, an honest eye for the ladies, and a hat-full of inventions to his credit.)

More precisely, I'm fed up with listening to the right wing call upon the Founders to support every single one of their poorly-conceived opinions and policies, bar none. Why all this kissing of the Founding asses?
Taxes? Whoa-ho-ho - the Founders wouldn't want any kind of taxes. (Oops, forgot about Section 8, Clause 1: The Congress shall have Power to lay and collect Taxes, Duties, Imposts and Excises...)

Deficits? Shiver me Founders... they loved a balanced budget, although they started the country off in severely debilitating debt. (Back in 1789, James Jackson, Revolutionary War hero and Senator of Georgia, said something about the debt with a familiar ring to us today: "It will establish a precedent in America that may, and in all probability will, be pursued by the Sovereign authority, until it brings upon us that ruin which it has never failed to bring.")
States rights? Oh boy oh boy, the Founders wanted the states to be little countries practically! Scarcely.

Women? Founders liked theirs in the kitchen or out back of the slave quarters. Oh, and that little suffrage problem...

Spare the Founder, spoil the child!

The most predictable thing about the radical right is that they are always gassed off about something.
Then, failing to formulate any useful solutions to pressing 21st century problems, the right wing buses in the Fabulous Founders, powdered wigs, waist coats and all, as if they were some sort of Oldies pop act.

But the right allows the Founders to bring onstage only small snippets of their original compositions - Founding sound bites, one might say - without ever letting the whole song play through.

The right clamors for what they consider the Fabulous Founders' greatest hit, "Let Me Tell You 'Bout the 2nd Amendment, Bro."  Only problem is... they want the Founders to start singing the lyrics half way through, skipping over the "Well regulated Militia, being necessary to the security of a free State..." part of the song.


The right also tends to forget the "Free Bird" of the Fabulous Founders: We the People of the United States, in Order to form a more perfect Union, establish Justice, insure domestic Tranquility, provide for the common defence, promote the general Welfare, and secure the Blessings of Liberty to ourselves and our Posterity, do ordain and establish this Constitution for the United States of America.
All that intent stuff is sooo confusing, I'm feeling woozy myself. Plus there's that creepy word the secessionists, interpositionists, and nullifiers all hate: "Union." Directly up front in the Rockin' Preamble lyrics.
The Fabulous Founders didn't write "a bunch o' loosely-connected, small-time political entities enabled to reject majority wishes at whim." Hard to find a melody that goes with that, anyway.
And what's all this about Posterity? Seems clear the Founders meant forever and ever - one nation kept together for all generations that follow. General Welfare? A wild guess here, but that means everybody's welfare. Hey, these aren't the lyrics to Louie, Louie. The Fabulous Founders didn't slur their words.
Finally, at the right wing revival concerts, they shout out for an encore: Play the "Powers of States," you Federalist devils!
That would be the radical right's touchstone tune - the 10th Amendment. It reads: The powers not delegated to the United States by the Constitution, nor prohibited by it to the States, are reserved to the States respectively, or to the people.
Hard to sing along with, let alone dance to, but it gets the fundamentalist right wing toes tapping. What can it mean? What's that strange syncopated beat? The right would have us believe that it means that anything that is not specifically spelled out in the Constitution is forbidden, an absurdist reduction if there ever was one.
This issue was firmly settled by the refusal of both Houses of Congress to insert the word ''expressly'' before the word ''delegated,'' and was re-affirmed in United States v. Darby, 1941, which says in the majority opinion,''The amendment states but a truism that all is retained which has not been surrendered."
But popular song lyrics - even of classics - have long been misheard, and certainly consistently misinterpreted:
The Beatles: "Michelle ma belle, some say monkeys play piano well, play piano well.."
There are other Oldies groups waiting to perform. The Flaming Whigs, Rocky and The Robber Barons, The New Frontiersmen, The Half-Dead Reaganites.
Nevertheless, the Fabulous Founders linger at the bash... Love your act, guys. Now get out of here. It's 2010.
...
Posted by RDL at 12:30 PM