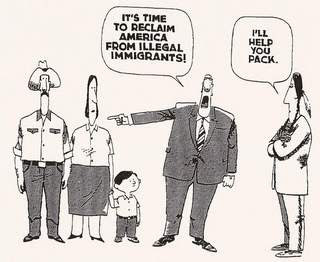 Here at our sea-washed, sunset gates shall stand
A mighty woman with a torch, whose flame
Is the imprisoned lightning,
And her name Mother of Exiles.
- Emma Lazarus
Inscribed on the base of the Statue of Liberty
Imagine for a moment not the fevered Arizona, ramparts up and bristling, on the border with Mexico preventing itself from being "overrun" by brown-skinned immigrants to the south, but an Arizona with Scandinavia, Germany, Holland and Belgium as its neighbors. Tens of thousands of fair-haired, ruddy-cheeked young men and women enter Arizona's sacred space.
Would the Arizona legislature pass a law permitting all fair-haired, ruddy-cheeked people to be stopped anytime, anyplace, anywhere in the state to have their "papers" checked?
Have a Nordic/Germanic accent? Turn around and put your hands behind you! Bad boy, bad boy, what you gonna do when they come for you?
Don't make me laugh, Arizona. Anyone with a brain the size of a chipmunk knows what racism looks like. And it's ugly.
There is another way, the New York Model, that has been forged through blood and tears over almost four centuries. New York, the Mother of Exiles.
Wave upon wave of ethnic groups dating to the 1630s have disembarked on the shores of the New York metropolitan region of roughly 20 million, beginning with the Dutch, English, Scots-Irish and Africans who displaced the native population. The Indians were pushed aside by the first northern Europeans. (There are about 120,000 people who claim Native American ancestry in New York City's 5 boroughs.)
Next, Germans nuzzled their way into the in-crowd, followed by the Irish who were met with such hue and cry - due to their Catholicism primarily, but also their poverty-stricken state created by the potato famine and British oppression - one would have thought the Know Nothings/Nativists were beset by a clone army of typhoid carriers.
But New York was just warming up. Next came the garlic-breathed Italians and Greeks, and the ultimate outsiders, the Jews. The exotic Chinese initially came in small numbers, though by World War I were jostling Jews and Italians for their own piece of real estate on the Lower East Side.

The next "problem" groups were Great Migration blacks from the South and Puerto Ricans, although the establishment could not do much about them except to discriminate once they barged into New York, since they were as American as the next folks by dint of citizenship law.

Fully 60% of New York City's population is composed of either foreign born individuals or the children of foreign born people. (Make note to inform Arizonans: we all work, study, shop, ride, etc., together without having the sky fall upon our heads on a daily basis.)

To say that the waves of immigration did not and do not place heavy burdens on the region's social services would be disingenuous. But, immigrants to New York are almost ridiculously quick to adapt, get to work, and assimilate.

Immigrants learn English more quickly in New York. Among adult immigrants who have arrived in the past five years, 40% speak English very well versus 32% in the rest of the country. Among recently arrived foreign-born kids, the difference is even stronger: 47% versus 36%. (Click here for a touching story about immigrants learning to read, check this out by Clyde Haberman in the NY Times the other day.)

What makes New York City so facile at absorbing immigrants? Our national caricature paints us as rough n' ready, brusque, cold and self-absorbed. Yet...
The big city has many things going for it.

New York is not racially or ethnically binary like so many other places. The city’s immigrants come from every corner of the globe, and no single group makes up more than 12% of the foreign-born population. That makes it almost impossible for any single immigrant group to form a large isolated ghetto.
Sure, the city has ethnic neighborhoods and always has, but it is easy for anyone to head elsewhere to work or shop. New York doesn't have "No-Fly Zones." The day the immigrant lands in the city of dreams mom and dad can parade the kiddies and grandparents down 5th Avenue, Park Ave., anyplace in the city they like.

Even in well-etched ethnic enclaves, the immigrant encounters native-born Americans and representatives of cultures other than his or her own. The city is a public place where residents have no choice but to share quotidian experiences. As immigrants and natives share experiences, they become more alike. Immigrants don't come here to displace us, they come here to be just like us as they add a little more seasoning to the broth.

In my day-to-day life in this past week alone, I interacted with West African cab drivers, Indian newsstand owners, the Greek diner staff, a Bosnian building super, a Yemeni deli guy, many Dominicans, a small number of Mexicans, a British-born baseball coach (yes!), a few native Irish floor re-finishers, and a sprinkling of native Italians. None of them were born here. (This is to say nothing of the countless Americans from other regions I encounter on a daily basis. When my young neighbor smiles and says "I'm from Des Moines," she might as well say "Hallo. I am from La Cote d'Ivoire.")

The immigrants, aside from generally appearing exhausted from work or worry, seem earnest, eager, fascinated with America and New York, and extremely interested in my own family's immigrant journey. What happened to my family in the 1870s and 80s is possibly more important to them than it is to my own social and ethnic peers. The biggest assimilation machine is The Golden Dream itself, past, present, and future.

Importantly, we in New York have a history of dealing with immigrants - not always pretty, but very concrete and incredibly well-documented. We've made our mistakes and have moved into a new era. New York has a helpful network of legal advocates and local assimilation institutions born of our contentious past ready to help immigrants navigate contemporary rapids.
Most New Yorkers don't live in gated communities, or play golf on private courses, travel in private cars isolated from each other, or swim at residents-only beaches. Our kids thrive in a huge, roiling mash-up in schools, sports, theater classes, dance, music, and on public transportation, cabs, shops, libraries, medical facilities, and the thronged streets. We also mix with 55 million visitors per year from all corners of the Earth.

There is barely time to ponder one's role in this large millennial swirl of humanity. But one conclusion you reach pretty quickly is that human beings are pretty much alike no matter where they hail from.
I am sure New York officials would be happy to take a few minutes to speak with those old, scared and cranky folks down in AZ. Give us a call, ya hear? We'll tell you how it all went down.
You know us in the crazy city. We LOVE to talk. You could learn a lot, Arizona. But the first things you have learn is some humility and you do that by finding your humanity. People crossing the border only want what your grandparents or great grandparents wanted, that which the United States delivered so well.
When the census form arrived a few weeks ago, I deliberated whether I should check my race as white or not. It seemed absurd to check "other" and write in "Italian-Irish." These days, in this place, it would have felt affected.

Eventually, I did actually check "other," then scrawled in "New Yorker" in a prominent place.
Posted by RDL at 9:56 AM