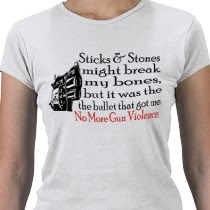 In 2000, for every one time a woman used a handgun to kill a stranger in self-defense, 222 women were murdered in handgun homicides.

- Violence Policy Center.Org (click here for link)
Republican rightists are obsessed when it comes to labeling liberal justices "activists" while they dance about like sugarplum fairies on Xtasy when portraying right wing radical judges as "originalists," or "strict constructionists."

In March, NY Liberal State of Mind expressed fear about the impending ruling in a posting entitled "Guns and Judges." (click)

The post closed with a quote by Oliver Twist's Mr. Bumble that bears endless repeating:

“If the law supposes that,” said Mr. Bumble,… “the law is a ass—a idiot. If that’s the eye of the law, the law is a bachelor; and the worst I wish the law is that his eye may be opened by experience—by experience.”
.
Posted by RDL at 11:05 AM