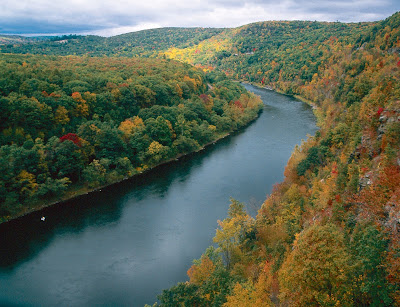 The Delaware River in Autumn

As the Gulf catastrophe plays on, there is - if you can believe it - a slower-moving, much farther-reaching calamity emerging.

It is being caused by something called hydrofracturing, a process that uses a slurry of sand and toxic chemicals propelled at high pressure against layers of shale that hold trillions of cubic feet of natural gas under them. Called "fracking" for short, it is in use and growing in rural West Virginia, Pennsylvania, and New York.

The 2005 Energy Policy Act, a direct outgrowth of the secret Cheney energy cabal, exempts hydraulic fracturing from federal water laws and relies on states to monitor and restrict water pollution. West Virginia and Pennsylvania have largely failed in efforts to stop the process. New York State has largely succeeded - so far.

The material polluting ground water and nearby streams is called "leakoff."

Aside from the actual toxics used in the process, fracking releases huge amounts of methane that finds its way into the water supply as do unwanted large concentrations of normally harmless elements such as iron and aluminum.

Already wells in central Pennsylvania have been closed and the drilling and gas companies have begun trucking in potable water by tanker truck to the affected areas.

Reports of people passing out during their morning showers and developing lesions on their skin have become too pervasive and persistent to ignore.

Most ominously for those in the Northeast, this Pennsylvania drilling is going on in the Delaware River watershed. The Delaware is one of the most pristine rivers in the United States, despite its proximity to the large population centers of metro New York and Philadelphia.

More drilling has been planned or been proposed much closer to New York City's main water supply.

According to a report in Vanity Fair:

"Volatile organic compounds (carbon-based gaseous substances with a variety of detrimental health effects) and other dangerous chemicals are burned off directly into the air during this on-site compression [liquefaction] process. Meanwhile, the returned fracking fluid, now called waste water, is either trucked off or stored in large, open-air, tarp-lined pits on site, where it is allowed to evaporate. The other portion of the fluid remains deep underground—no one really knows what happens to it."

Each well that is opened requires between 5 and 8 million gallons of water to operate. This is the equivalent of 650,000 5-minute showers. (It has to be trucked in, requiring 800 to 1,200 round trips by heavy trucks to each site. New York has forbidden the use of municipal water for this purpose, so if fracking ever goes ahead in the state it will require even longer-distance trucking tactics.) And what goes into the ground must come out, somewhere, sometime. In the case of fracking 1/3rd of the water used is returned as polluted waste water.

“There has never been any evidence of fracking ever causing direct contamination of fresh groundwater in Pennsylvania or anywhere else,” said Scott Perry, another Oil and Gas Management official, as recently as April 2010.

This is patently untrue, another instance of the lies that the energy industry has told the American public about oil, coal, and gas extraction, all the while dragging their feet on the way to a clean energy future.
In east-central Pennsylvania, whole towns have been affected by fracking, homes have been shuttered, schools have been tested and their air found to be polluted.
What chemicals are used in the process? Hold onto your gas masks:
They include such substances as benzene, ethylbenzene, toluene, boric acid, monoethanolamine, xylene, diesel-range organics, methanol, formaldehyde, hydrochloric acid, ammonium bisulfite, 2-butoxyethanol, and 5-chloro-2-methyl-4-isothiazolin-3-one.
The last chemical is known as a "bad actor" in the field of toxin studies. It is an ingredient in pesticides and is deemed a highly acutely toxin, a cholinesterase inhibitor (endocrine system disrupter), a known/probable carcinogen, and known groundwater pollutant or known reproductive or developmental toxicant.

An intensive study conducted by New York City, concerned about the spread of hydro fracturing into the city’s 1,585-square-mile watershed in the Catskill Mountains and upper Delaware River basin concluded that “Intensive natural gas well development in the watershed brings an increased level of risk to the water supply: risk of degrading source water quality, risk to long-term watershed health... risk of damaging critical infrastructure, and the risk of exposing watershed residents and potentially New York City residents to chronic low levels of toxic chemicals.”

The city’s report went on to say that while a single well may be environmentally benign, the risks become unacceptable “when evaluated in the context of hundreds or thousands of other wells.”
Wes Gillingham, program director of Catskill Mountainkeeper, said of the report, “One of the reasons industry could get away with these incidents is that there was a lack of science. New York City used reputable geologists and came up with the science.”
Finally, the ineluctables.

As surprising as this may be to those unfamiliar with the Northeast woodlands and meadows, the rural areas of Pennsylvania and New York are relatively unspoiled. (New York State, for instance, has two of the country's roughly two dozen big city unfiltered water supplies: New York City's, the nation's biggest, and Syracuse's. Both would be put at extreme risk should fracking for "natural" gas be implemented wholesale.)
Moreover, the regions under the shadow of this threat have largely avoided industrialization and even extensive residential development. The old mixed farmlands and incidentally preserved lands and waters have been little changed over centuries. Second-growth forests in some areas are now close to 200 years old.
One gas industry spokesman, fighting his dark version of the good fight in Pennsylvania, proclaimed that the drilling and fracking had produced more than 300 jobs already in that state. That's about as many people as attend a large elementary school.
That is worth jeopardizing the water of tens of millions of people?

Put up the windmills now, build the solar panels. Use the car less. Drive at 55. Turn off the lights.
.
Posted by RDL at 8:45 AM