The Gulf Spill: Maybe BP Will Blame It On Sikh Extremists 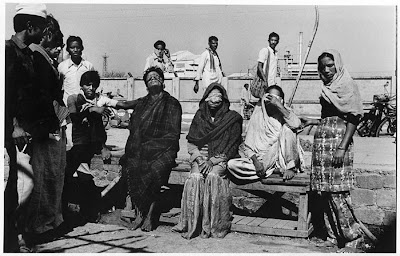 According to Reuters, "A court Monday found the Indian unit of U.S. chemicals firm Union Carbide guilty of negligence and sentenced seven Indian former employees to two years in jail over one of the world's worst industrial accidents that killed thousands in 1984."

Twenty-six years later, these fiends have received just two years in the slammer. For killing as many as 25,000 people. (Official Indian government figures put the number at a "mere" 3,800.) Another 100,000 people have suffered the sickening effects of the release of 40 metric tons of the highly toxic methyl isocyanate [MIC].

Even better news for the world at large, methyl isocyanate is used in pesticides, as well as rubber and adhesives manufacturing. Check your labels carefully.

Further, the Indian government claims that the chemical has NOT polluted groundwater, although every independent testing agency that has taken measurements says it has.

Righteously, "Hundreds of protesters, many waving placards saying 'hang the guilty' and 'they are traitors of the nation,' tried to force their way inside the court complex but were stopped by police."

According to an overview in 2005 created by Edward Broughton of Columbia University's Mailman School of Public Health, "The specific site within the city was zoned for light industrial and commercial use, not for hazardous industry. The plant was initially approved only for formulation of pesticides from component chemicals, such as MIC imported from the parent company, in relatively small quantities. However, pressure from competition in the chemical industry led UCIL [the Indian subsidiary of Union Carbide] to implement "backward integration" – the manufacture of raw materials and intermediate products for formulation of the final product within one facility. This was inherently a more sophisticated and hazardous process."

"The local government was aware of safety problems but was reticent to place heavy industrial safety and pollution control burdens on the struggling industry because it feared the economic effects of the loss of such a large employer.

"Immediately after the disaster, UCC [Union Carbide] began attempts to dissociate itself from responsibility for the gas leak. Its principal tactic was to shift culpability to UCIL, stating the plant was wholly built and operated by the Indian subsidiary. It also fabricated scenarios involving sabotage by previously unknown Sikh extremist groups and disgruntled employees but this theory was impugned by numerous independent sources.

"As further insult, UCC discontinued operation at its Bhopal plant following the disaster but failed to clean up the industrial site completely. The plant continues to leak several toxic chemicals and heavy metals that have found their way into local aquifers." [So, the gas leak of the manufactured gas actually caused the loss of the jobs it was supposed to save.]

Further, according to Broughton's work, "UCC has shrunk to one sixth of its size since the Bhopal disaster in an effort to restructure and divest itself. By doing so, the company avoided a hostile takeover, placed a significant portion of UCC's assets out of legal reach of the victims and gave its shareholder and top executives bountiful profits. The company [UCC] still operates under the ownership of Dow Chemicals and still states on its website that the Bhopal disaster was 'caused by deliberate sabotage.'"

And here is what a life is worth via the Indian government's assessment: "By the end of October 2003, according to the Bhopal Gas Tragedy Relief and Rehabilitation Department, compensation had been awarded to 554,895 people for injuries received and 15,310 survivors of those killed. The average amount to families of the dead was $2,200." [U.S. Courts decided that the suits could not be heard here.]

While we hope that the number of dead in the Gulf spill will be limited to those who died in the initial blast and fire, we have no way of knowing how many lives will be economically damaged, disrupted, or how much destruction will be caused to the natural environment. Nor do we know how long it will last.

Money will take away some of the sting - if there is enough in the BP insurance pot.

Potential financial loss, however, will not prevent the next big environmental catastrophe. The threat of hefty jail sentences will.

Executives and higher level industrial site workers, knowing they could do hard time for avoidable accidents - 10, 20, or 30 years, or perhaps for the rest of their lives - would certainly stop gambling with people's lives and the already endangered environment.

As the protesters over the Bhopal whitewash know and we should know well, they are traitors of the nation.
.
Posted by RDL at 11:03 AM