The Failing Of The Left In The Face Of Corporatism 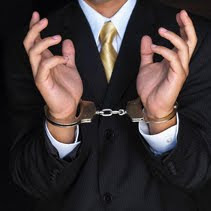 Since this blog began in January, I have argued for criminal penalties to be imposed on directors and top executives of companies whose activities are so egregious that they amount to offenses against an entire society, and, in the case of the Gulf oil catastrophe, against humanity (as well as nature).

If we don't take this step, it is virtually guaranteed that the excesses will continue and surely grow more dangerous.

Four years on now from the mortgage-bond bundling scheme's hay day in '06 and '07, no one has been held criminally responsible. Executives from Merrill Lynch, Bear Sterns, and their co-conspirators in dismantling the financial stability of the entire world have faced some wrist-slapping. None has even lost his or her professional license. Perp walk? Maybe in Gucci loafers on the streets of the Hamptons.

BP knew for decades - as have other oil companies - that they had no emergency plan in place to deal with a huge accident on the ocean floor. It wasn't an oversight; it was purposeful. The purpose was saving money. Supposedly the Justice Department is investigating with an eye toward bringing criminal charges. (Stay tuned for more disappointment.) Imagine working above on a tall building (as so often happens here in New York) without a protective shed to shield pedestrians from falling debris? Oops... sorry that plummeting gargoyle killed your entire family.

McNeil Consumer Healthcare, the Tylenol manufacturing arm of Johnson & Johnson, accused of having dirty production facilities and shabby quality controls that allowed excessive amounts of acetaminophen to enter children's products, may be up for criminal prosecution.

At a Congressional Oversight and Government Reform Committee hearing, Rep. Darrell Issa, R-CA, asked an FDA official whether there was criminal liability as a result of the recalls. "Well, it has been referred to the FDA's crime division," responded witness Deborah Autor, a director at the FDA's compliance office.

“I have become deeply concerned about your company,” Rep. Edolphus Towns, D-NY, who is chairman of the Oversight Committee, told the Johnson & Johnson executives who testified. “It paints a picture of a company that is deceptive, dishonest and willing to put the health of children at risk.”

On the tainted food side of things, readers should be happy to know that the U.S. ranks 18th worldwide in the quality of its inspections and speed with which it handles issues such as e. coli contamination. Who's first? According to Meat Trade News Daily, it's Brazil. A headline in the June, 2010, issue of the trade pub shouts: "Brazil - Leading the world in meat traceability and rapid response."

In Brazil, it is a criminal offense punishable by up to 10 years to distribute tainted food.

Where is the liberal left on this? Silent. Everyone knows that the roots of liberalism go back to the Progressive Era, to the busting of child labor practices, sweatshops, and filthy stockyards a la "The Jungle." We were raised on this stuff. But now... well, we should be ashamed of our lack of focus.

Strip them of their ill-gotten gains, put them in jail. The honor system doesn't work with dishonorable people.
...
Posted by RDL at 11:13 AM