A Different Take On Church and State

There can be no better day than this Sunday in the midst of a hellishly hot July almost exactly 85 years after the Scopes Monkey Trial to give some honest advice to the religious institutions of America.

Lay off, ease up, back down on matters of sex, clean up your own backyard, and become more sympathetic, more caring, more specifically involved in the quotidian spiritual and economic needs of people while becoming less involved in the pointless abstractions that necessarily arise when church and state tango.

This goes for all established religions, although my take comes from a particular perspective.

I attended Catholic religious schools from kindergarten through college, so religion was a part of my everyday life. Hard as it may be to believe given that, religion informed my life without governing it.

What made me proudest was giving to charity on an almost daily basis - nickels, dimes and quarters - for other children, a lot like me but who lived in squalor in far off Africa and Asia. Or right here at home. Maybe down the block. Being suffused with the good feeling of having helped out someone, even from afar, inflected the long hours of kneeling, praying, singing and contemplation.

In April of 1966 Time Magazine published its famous edition that asked "Is God Dead?" 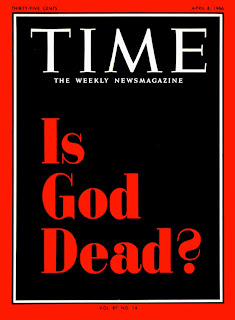 Not yet 16 years old, I was a sophomore in high school, and for two full weeks, in Theology, History and English classes the debate raged on. This in a Catholic prep school in suburban New York 45 years ago now.

Many of the conclusions are lost in the shrouds of time. But a summation would run something like this: God is not dead. We are dead to the possibilities of God. And to belief in "the good." And therefore to the action needed to bring about a better world.

Why we were open to such thoughts at 15 and 16, aside from the intellectual courage of our teachers, is a topic for a much longer thought piece.

It was heady stuff and best not discussed at the family dinner table lest our hidebound parents find themselves in the middle of a collective domestic thrombosis.

Later, in college, these thoughts would become one strand in the anti-Vietnam War movement. Inspired by the Berrigan brothers, both priests, and the likes of Thomas Merton, also a priest, we took aim at the heart of the radically anti-human activities of our government in its prosecution of the war.

On other fronts Catholic, as well as other Christian-minded activists, also inspired. Caesar Chavez in the farm labor movement, Dorothy Day of the Catholic Worker Movement, and Tom Cornell, a seminal anti-war activist of the early and mid-1960s.

Day, who died in 1980, was the foremost advocate of her time of the Roman Catholic economic philosophy of Distributism, a system  considered to be a "third way," between rampant plutarchic capitalism and state socialism, then widely interpreted to be either Leninism/Stalinism or Maoism.

When we look at what is wrong with our American economic system at this very moment, we find a deeper appreciation of Distributism. In brief, it is pro-capitalistic but calls for greater participation by all members of society in "ownership" of property and - to use a phrase fraught with negative connotations - the means of production. Even further, it means a more thorough involvement in decision-making processes, such as the ones raging over health care reform, energy and the environment and race relations.

This political-economic philosophy is rooted in Pope Leo XIII's 1891 encyclical Rerum Novarum, a masterwork on economic justice that eschews both Communism and unfettered capitalism, concerning itself with "the misery and wretchedness pressing so unjustly on the majority of the working class..."

Other encyclicals by subsequent popes followed and built upon Leo's legacy. In 1931, Pius XI issued Quadragesimo Anno, (meaning "Forty Years," i.e., after Rerum Novarum), a further discussion on the nature of private property and the intrinsic ethical responsibilities put upon the "haves" of society to the "have nots," or "have-not-enoughs."

We have come exactly to this pass at this moment, these same questions. The pressure on the vast middle class in America is palpable.

There is simply not enough participation by everyday people in their government or in the businesses that they serve, usually dutifully. The country has been run by experts for far too long, and the experts have run the big train into a huge ditch. Now the best they can do is to argue over how to pull the train out and re-start it. Meanwhile the train sits and rusts.

We live in a country with 80 million college-educated people. (Never mind the under-educated and chronically poor and underprivileged for the moment.) Yet, the plutarchy that actually runs things numbers no more than 25,000 individuals. The vast majority are white men. (Although white women as they gain a share of power seem to be acting no more responsibly than their male counterparts.) The majority of the plutarchs are radically conservative. Virtually all are rich.

G.K. Chesterton, perhaps England's greatest under-sung genius of the early 20th century, said, "Too much capitalism does not mean too many capitalists, but too few capitalists." That sums up Distributism's critique of modern industrial democracy. More people need to acquire a bigger stake in the society.

As we watch the dance between so-called liberals and the radical right in America today with increasing anxiety, we should be reminded of Chesterton's famous observation: "The whole modern world has divided itself into Conservatives and Progressives. The business of Progressives is to go on making mistakes. The business of the Conservatives is to prevent the mistakes from being corrected."

Almost every great revolution of history began because the middle class had become disaffected. (The proletarian Chinese Revolution is one notable exception.) The English and French Revolutions, our own American War for Independence, those of South America in the 19th and 20th centuries, even the Russian Revolution, all were fomented by unhappy middle classes. What became of them later is a different question altogether.

We are at a crossroad. The middle way beckons.