The Boomer Solution To Our Intractable Reading And Math Proficiency Problems 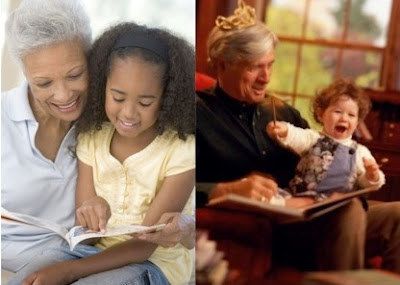 The strategy is - put people back to work and teach young children to read well. Below are some tactics to get there, at least in part.

Last week NPR reported that the unemployment rate among the 55-and-older set hit 7.2%, the highest since the end of World War II. And while that may be lower than the overall rate, older workers tend to stay unemployed longer, with the average length of the job search more than 35 weeks.

A Pew survey shows that 1 in 3 unemployed older workers hasn't had a paycheck in more than a year. As a result, in 2009, 3 million older workers have simply given up and declared early retirement and have begun drawing Social Security benefits.

Yet this is the best-educated, most highly-skilled cadre in our society as of this moment and it is being pulled from service.
Meanwhile, disadvantaged students in the first grade have a vocabulary that is approximately half that of the average advantaged student (2,900 and 5,800 words respectively). The first grade! For the underprivileged, the race is essentially lost before the starter's pistol has been sounded.

And, if you can't read well, the chances you will do well in math are next to nil.

The marriage of Boomers and needy preschool children is of urgent importance.

Almost anyone with a few years of college and beyond, or even those with a solid high school education, are capable of reading aloud to and giving basic reading, writing and math instruction to a 4, 5 or 6 year-old.

The Boomers who want to retire because of difficulty in finding new employment should be entered into a new program dedicated to transmitting these basic skills to deprived and neglected youngsters.

The Boomers would receive a stipend that would not be taxable and that would not affect their Social Security payment levels. The reading and math sessions could easily be conducted in schools before or after hours, in community centers, in the halls of religious institutions, libraries, even outdoors. The sessions could be for two hours per day, four days per week.

Let's say there were 1,000,000 of these "into-the-breach" senior tutors. And let's say they received $1,000 per month. That would cost $12 billion per year. The extra money added to the average retiree's $1,170 per month in SS money would help immensely, raising their monthly income to $2,170 per month. One can fairly assune that the extra money, like unemployment benefits, would immediately be recirculated into the economy in the form of consumer spending.

The benefits to the children who would be affected by such programs are not immeasurable, although the following statistics would serve to astound even the most skeptical among us.
(Stats are from http://www.readfaster.com/education_stats.asp - there are plenty more at their site.)

It is estimated that the cost of illiteracy to business and the taxpayer is $20 billion per year.

It is estimated that more than $2 billion is spent each year on students who repeat a grade because they have reading problems.

The educational careers of 25 to 40 percent of American children are imperiled because they don't read well enough, quickly enough, or easily enough.

Children who have not developed some basic literacy skills by the time they enter school are 3 - 4 times more likely to drop out in later years.

One-fifth of high school graduates cannot read their own diplomas.

The children would receive the benefits of all the cumulative applied knowledge of the Boomers. They would stay in the school and learning environment for a longer amount of time each day. They would be sheltered from detrimental home situations, from excessive TV watching and video game playing.

The Boomers - with all their phenomenal skills coming back into play - would find a new sense of purpose plus a reasonable new source of income.

That income would help in a directly stimulative way to reinvigorate our struggling economy.

Volunteerism is all well and good, but the educational crisis is reaching high tide and it needs to be treated with early in a child's life. Volunteers are wonderful, but this is a different kind of predicament.

Maybe this is the new WPA or CCC. Spend money directly on things that are of dire importance to our future. And do something intrinsically good in the bargain.