Illegal Immigration, The Decline Of Unions And... Prohibition 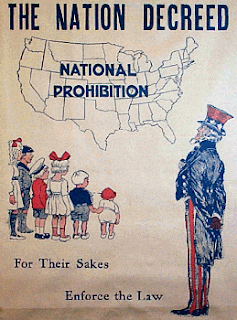 Yes, Prohibition. The mother of all unintended consequences spawned by modern social meddling.

Every quasi-educated individual knows the Prohibition Cliff Notes by heart:

A gaggle of reactionary, business-led, do-gooder blue-noses pushed to "dry out" America in a quest to stop rampant drunkenness, promote money-saving, stop domestic abuse and improve industrial man's work habits. What they didn't bargain for was Al Capone, mayhem on the streets, an enthusiastic disregard for Law with a capital "L," and not much of a rollback in drinking.

Now to the decline of unions. From 1948 to 1975, the percentage of people who belonged to unions was remarkably stable. The high water years were 1952 through 1955, participation averaging around 32%. The level stayed right around 29 to 31 per cent those 27 years.

Today's mark is the lowest ever at around 10%.

More shocking is the decline in real earning power.

As union membership has declined, so too have real wages across the board. Figures are given in 1982 dollars for easy comparison. In 1954, average weekly wages were about $319 for all workers. In 1983, they were about $277. Latest figures show that today they are about $272.

This trend accelerated beginning with Ronald Reagan's 8 years of union busting. He was the "Great Communicator" and the message he conveyed so clearly to American blue collar (mostly male, white and black) workers was this: "Go to hell."

Turns out it wasn't morning in America at all, but rather the beginning of a long, cold night that shows no signs of ending. Adding insult to injury, hours worked have risen during that same long period of wage decline.

Enter the illegal aliens, like stock characters in a depressing morality play.

Who wrote them into the script? Certainly not native-born American workers, who had much to lose, and indeed have lost out, to the imported low-wage workers.

Who wrote illegal aliens into the script? Business interests and their right wing political handmaidens who think the once-proud and productive American worker has had it too good.

Depending on which traditionally typical union industries you examine, the wage differential between union and non-union pay is staggering. Overall, union jobs (including benefits) pay an astronomical 28% more than non-union jobs. There's the difference between the good life and the slave life.

While neither outright condemning nor fully supporting illegal aliens seeking better opportunities in the United States, it is clear that de-unionization has led to a labor free-for-all that has thrown more and more unskilled and semi-skilled workers into the same boiling cauldron. This has a natural spillover effect on even better paid white-collar, and stereotypical pink and light-blue collar wage-earners. The ever popular war of all against all is on. (To boot, many illegal workers are paid in cash, so they and their employers avoid paying taxes and Social Security and disability insurances.)

Further, these recently-arrived low-wage workers have children and grandchildren, so a new culture of low expectations in terms of pay and benefits settles in pretty quickly. Not to mention a certain docility when it comes to employer demands and a general sense that one's destiny is consistently in the hands of others.

Poured into the cauldron come the effects of "Free Trade" and "Globalization."

How much further can our real wages fall?

A lot. One little-heralded Congressional Budget Office report has said that real wages might fall as much as another 10% in the next 10 years. The forecast for unskilled and semi-skilled Americans-by-birth is even grimmer. The CBO predicts their wages will fall by 22% in real terms. There is a particularly ominous message in that for many African-Americans.

To circle back around to Prohibition... at least it ended through the efforts of F.D.R.'s administration and a general sense among the electorate that it was an almost entirely idiotic policy. Although its after-effects live on in the general lawlessness that we experience as Americans. (For instance, in the early 1900s, the United States had the lowest murder rate in the developed world. That rate become the highest by the mid-1920s and we take that dubious honor to this day.)

The decline of organized labor and the attendant rise in the number of low-wage workers shows no sign of abating.

Border fences and random stops are not the answer to the illegal immigrant problem; persuading, if not compelling, low wage workers - regardless of their origins - to join unions in order to feel empowered, to become part of the historic American Dream, is one large step toward solving the puzzle.
.
Posted by RDL at 9:30 AM