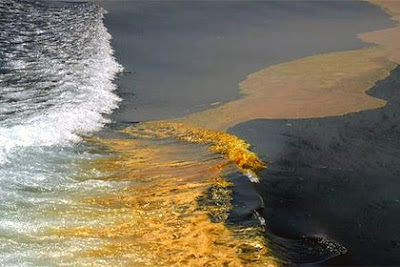 Sadly, by now, we are accustomed, if not inured, to the scenes of ecological disaster from the BP blow out in the Gulf. As we speed by the 85-day mark, we are stunned, depressed, and feel helpless.
But potentially worse, AP has reported that there may be as many as 27,000 abandoned wells, drill sites, and test holes in the Gulf alone.
Not all of them ever showed signs of black gold a-bubblin' up from the ground, but there are approximately 3,500 of these capped off wells that once produced oil, plus 11,000 more that may have produced. No one seems to have kept track of any of this including the federal and appropriate state governments. If the oil companies and their associates in drilling and transport have kept track, you can be sure they ain't tellin'. Environmental groups' estimates hover around an additional 3,500 that fall in the category for concern.
Needless to say, these holes and caps are not regularly or properly inspected.
Some of these wells date back to the 1940s and 50s, but most seem (again, records are so spotty no one actually knows) to date from the late 70s into the 80s and 90s. This all means that roughly 7,000 wells once were active enough to warrant capping. Further simplistic explanation: it means that there was not enough oil coming out of a given hole to militate further exploitation, but there was enough that the damned thing had to have a big metal sock put in it.
Let's be conservative and say that the average age of these 7,000 abandoned holes is 25 years old. And let's say slightly fewer than half of them - 3,000 - are leaking oil at the tiny rate of a gallon per day. Now the fun basic math part begins. 3,000 gallons x 365 days x 25 years / 55gallons (one barrel) = 497,727 barrels of oil leaked into the Gulf since 1985. Shrimp gumbo anyone?
This doesn't take into account leaks from ongoing operating rigs, spills during transfer while transporting the stuff, or natural leaks from fissures and openings in the sea bed. All told, we are talking about millions of barrels of oil that have been spilled into the Gulf in the last quarter century.
On to Fox News. I shudder to even have to say this, but the best article I have read was published on Fox's website, which summarized and expanded AP's investigation.  Read their coverage by clicking here. Have to give the devil his due.
It says among other things:
Companies may be tempted to skimp on sealing jobs, which are expensive and slow offshore. It would cost the industry at least $3 billion to permanently plug the 10,500 now-active wells and the 3,500 temporarily abandoned ones in the Gulf, according to an AP analysis of MMS data. Many such jobs take more than $200,000 and 10 days. Difficult jobs in deep water can cost several million dollars, and some companies own hundreds of wells.
Fox can't start sandbagging me like this. My old liberal heart just can't take it. I do believe in spooks. I do believe in spooks...
Posted by RDL at 8:33 AM