There is a vast problem with the interpretation of law in our land and the current Supreme Court is leading the charge to the rear. Sometime in the next 6 weeks, they will vote to allow a revolutionary loosening of state and local gun carry laws. Some of these restrictions have been in place since the Civil War. Most date to the 1920s into mid 20th century America when guns became commodities in the eyes of the murder-mongering makers of firearms.

There is no commonsensical reason to allow this. And the fundamentalist law upon which you can be sure the Court will base its decision is shaky in the best of circumstances. In a nutshell, the 2nd Amendment was included in the Bill of Rights for a few understandable, if now outmoded, reasons.

First, to maintain a well-regulated (state) militia to countervail any future strength of the national government. Thus, keeping arms was a civic obligation rather than a "personal right." No attendant obligation adheres today, just the ghost of the Outlaw Josey Wales.

Third, guns used in self-defense, which in the immediate post-colonial period usually meant against Native American Indians, highwaymen, or the specter of resurgent Tories based in Canada.

Fourth, there was an anti-royal, anti-establishment sentiment embedded in the 2nd Amendment. In England, and all of absolutist Europe, there was a fear of "the commoner" owning arms because revolution would be a constant threat. Paranoia - well-founded as it turned out in the case of the War of 1812 -  was rampant. American citizens knew it was much easier for all the king's men to deal with pitchforks and wooden staves than with muskets.

Moreover, the bearing of arms was seen as a professional right back in Europe, a guild if you will, and the tools of that trade were weapons. Other guilds and professions were just as jealous of their right to, say, keep and bear hammer and anvil, or grinding mills, or bread ovens, or amputation saws. The spirit of freedom in America was to be a leveler and keeping guns was part of this process.

Finally, even in America's biggest cities there was no effective police force until the late 19th century.

We live in a different age now than the one that spawned the 2nd Amendment.

You wouldn't think of strapping on a cutlass to go waltzing into the local Stop N Shop, would you? Or carrying a net and trident when picking the kids up from little league practice? Alas, if the central power of the federal government is the issue, we might expect that citizens should be permitted the flying of Stealth fighters above Scarsdale, or ownership of unmanned drones at their summer cottages on Lake Placid. You know, just in case health reform passes and the government has to be slapped down.

Hunting seems to be a settled issue. Humaneness and safety have to be kept by steady vigilance, but hunting is on the books as an accepted arena for guns.

So, that leaves crime prevention and self-protection.

Ironically, although the Supreme Court can't seem to get it into their law-thickened puddings, the states with the strictest gun laws have the lowest gun death rates.

An anomaly lies in two New England states, Vermont and New Hampshire, which have very loose gun control laws AND low gun death rates. However, it should be noted that neither has a major city within its borders. Similar anomalies lie in north central farm states such as North Dakota.

The Supreme Court, though, seems to ignore the very visceral effects of gun control laxness. New York City, after all, is not Rapid City. The idea that open carry permits could be issued to all 6 million adults in the 5 boroughs would be cause for knee slapping if the possibility weren't about to become reality through the reliance on effete theory the Court seems hellbent upon.

As Voltaire said, "Common sense isn't so common." The lack of horse sense is particularly irksome coming from men on the bench who actually believe they are well-educated when, in fact, they know next to nothing about the way real human beings live and want to live. They might as well be disputing the number of angels that can fit on the firing pin of a gun.

In case you want your meal in fact-filled bites, chew on this: gunshot wounds cost the American financial system about $6 billion per year. 67% of the cost is borne by either taxpayer money or private insurance, which is a cost spread among us. (About $4 billion per year, or $13 for every man, woman and child.) 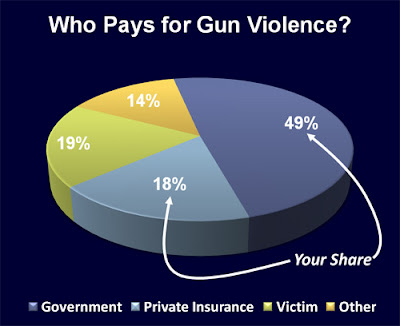 I leave you with this thought from Oliver Twist, the core quote of which is well known:


“If the law supposes that,” said Mr. Bumble,… “the law is a ass—a idiot. If that’s the eye of the law, the law is a bachelor; and the worst I wish the law is that his eye may be opened by experience—by experience.”