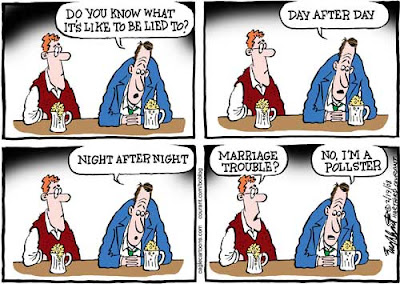 The "National Poll" is American political dialogue's red herring factory, pumping out misconceptions, misperceptions, and thoroughly useless information. Pick your favorite poll - whether it's from the left or the right.

Even in the bluest of states, the current reception being given health care reform is modest at best. So, states such as Masachusetts and New York, ol' reliables in the liberal column, may "only" be in favor 57 to 43%. But in Texas, the anti-reform fever is running at 63 vs. 37%.

When you combine Mass. and NY states' opinion with that of Texas you get an overall 47% approval of reform with 53% against. Sounds damning.

This sort of scenario is playing out across all the states, and like national presidential polls these have no real bearing on legislation or future prospects.

We are a republic, not a direct democracy.

It makes no difference if a Democrat wins a district by 1,000 votes in New York State while a Republican wins a Texas district by 50,000 votes. They both go to Congress as equal members. At the moment both represent 650,000 citizens.*

The media are doing a disservice by not particularizing such splits and explaining the meaning of them. And politicians - especially the masters of misinformation on the right wing - are seized by tics, hiccups and a case of the whoops every time a national poll shifts one way or another.

On top of this, a more thorough set of polls would parse out the number of people who position themselves on points farther left in the Democratic Party who are dissatisfied with the outcome of health care reform. They, too, are unhappy, no doubt because of the loss of a public option, and perhaps are communicating their feelings by "disapproving" of the bill.