The fault, dear Brutus, is not in our homemade brownies, But in ourselves, that we are couch potatoes.


For some time now, I've been holding off on criticizing the NYC ban on homemade baked goods sold at public school fundraisers. (Click here for the NY Times story) This may not seem an earth shaking controversy, but it is indicative of how often government, even the best-intentioned, seems to suffer myopia when it comes to big picture problem-solving.

Last week, looking through some old family photographs, I saw pictures of my brother and me, cousins, neighborhood kids and classmates. It is the late 1950s and we are between 7 and maybe 13 years old. Thus open the flood gates of memory and desire.
The remarkable thing about the photos is that no one is obese, and hardly anyone even looks chubby. In fact, we most look rather scrawny, and when in bathing suits we look pretty well muscled, even the kids who I knew not to be "athletic."
To describe our diets as anything but rich would be a lie. We devoured milk, ice cream, butter, and red meat until we practically mooed; desserts for lunch and dinner; no such thing as diet soda; nickel candy bars; the constant temptations of soda fountains; and serving sizes that would choke triathlon competitors.
Yet, there we were looking as lean as Spartans.
We spent enormous amounts of time walking, running, playing, jumping, hanging by our feet, chasing, tagging, pushing, shoving, building, destroying, hiding, seeking, batting, shooting, passing, and generally a rollin' and a tumblin'.
By age 10 I was walking, running or biking about 3/4 of a mile each way to school. I had a full 45 minutes of recess. (It had to be pouring rain or below 15 degrees before recess was canceled.) I had an hour's worth of gym 3 days a week. At 3 o'clock when I was dismissed, I ran or furiously pedaled home on my heavy, clunky bike (passed on to me by an older cousin through my older brother) that was more suited for U-boat ramming than land transportation.
From roughly 3:30 until it was either dark or suppertime, dozens of kids would play outdoors like "wild Indians," as the expression went or, even more exotically, "like wild Armenians." Indoors, we were "wild banshees."
We would then tumble to the kitchen table cornucopia and gorge until sated. An hour, maybe an hour and a half, of homework ensued and we were done. Bathed. An hour of TV, maybe, but I think less - that was saved for Saturday and Sunday. Exhausted, almost comatose. Full. Happy. And, as it turns out, pretty learned. (In 5th grade I remember a geography test asking us to give the twenty principal rivers of the United States!)
Long story short, it's not the diet or desserts that have really changed. It's the exercise, stupid. (Not that I am recommending the animal fat and sugar rich diet of the 50s.)
Kids in New York City schools currently receive 24 minutes per day on average of phys ed. They average 15 minutes of recess. Many, especially as they move up the grades, have no recess at all.
Because conditions have changed, kids don't walk, if ever, very far to school. Biking is not in the equation generally. Homework has grown to outlandish proportions. In middle school, they can have 2 to 3 hours of homework if they're working mach schnell. By high school, it's up to 3 to 4 hours and even more at crunch time.
No wonder they're craving sugar. I'd be craving a month in the Caribbean on a sugar cane plantation.
Toss in a couple of hours of media time and a midnight bedtime and you have all the keys to the obesity epidemic you need.
Insisting that parents stop baking goodies is weird, mean, and counterproductive. Asking PTAs to buy wholesale lots of chemical-laden Doritos or Pop-Tarts to resell at retail prices adds absurdity on top of impracticality. It further demolishes a fragile sense of community. New microscope for the bio lab? We didn't do it - Doritos did!
What to actually do?
One strong possibility is to lengthen the school day and work both phys ed and the fine arts back into the curriculum. Mind, Body, Soul. However, given that the academic requirements of preparing for the modern world are more strenuous than in yesteryear, perhaps it is even a better idea to add a full year between 7th and 12th grade, making the primary/secondary schedule 13 years as opposed to the traditional 12. 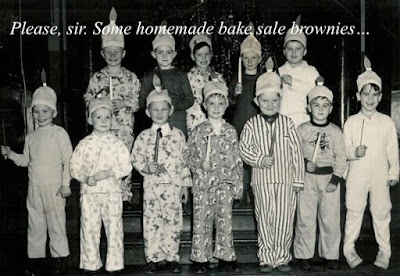