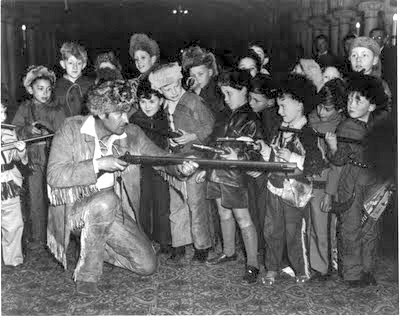 The 1950s was an age of fads and crazes fueled by youth. Hula
Hoops, Silly Putty, the Frisbee, Elvis, rock n roll,  hot rodding, and of course, Davy Crockett.
Fess Parker didn't just play Davy Crockett. In the eyes of American kids Parker was Davy Crockett.
Professor Kenneth Jackson of Columbia University is perhaps the most interesting academic in America. His work on the suburbanization of America, The Crabgrass Frontier, is a piercing, critical look into the phenomenon. (Jackson is also the editor and major-domo of the masterly Encyclopedia of New York City.)
Between 1945 and 1955, almost 10 million people moved from cities to the suburbs, to the crabgrass frontier.
But somehow the old frontier called us back for another look. Fitting, since for the first time, many Americans found space and a sense of freedom unknown to their immediate ancestors. (Interestingly, it was Crockett who described the vicious Irish gangs of the area of Manhattan known as The Five Points as "too vicious to swab hell's kitchen.")
So, out of New York's Lower East Side and Little Italy, out of Williamsburg and East New York, out of the South Bronx they went. Boston, Philadelphia, Baltimore, Buffalo, Cleveland, Chicago and all the old "eastern cities" seemed to be emptying, of whites at any rate.
And the prodigious number of kids the migrants were producing trekked out with them.
Side by side with the new clothes required for suburban living - preppy, casual, and most of all, clean - suddenly interloped coonskin hats, fringed jackets and pants, and Daisy air rifles. This was all due to the (some would say evil) marketing genius of Walt Disney. (Actually Disney was unprepared when the series first debuted, having produced not one retail item. You can imagine the frantic order to hat-makers in Orange, N.J., the "Hat City" - we need 2 million coonskin caps - yesterday!)
The power of the craze is almost impossible to convey today. The only thing that has ever rivaled it is the very familiar Beatlemania story of 10 years A.C. - After Crockett.
The series' episodes premiered on Disney's television program in December of 1954, continued on air through December of '55, and were combined into a theatrical release film the same year. There were subsequent seasons as well, but '55 was the monster year.
Remarkably, by the end of 1955 American kids and their parents had bought over 300 million dollars' worth of Davy Crockett paraphernalia. That's about $3 billion in 2010 money. In one year. (Take that, George Lucas.) So, while Disney is the house that mouse built, Davy Crockett furnished it, enlarged it and turned it into a castle. All this the same year Disneyland in Anaheim opened.
Four different versions of the show's theme song, The Ballad of Davy Crockett, were in Billboard's Top 10 at the same time.
In the full version of the song, Crockett earns more sobriquets than Homer's Odysseus: King of the wild frontier, of course; the man who don't know fear; the buckskin buccaneer; choice of the whole frontier (when he ran for Congress); the Canebrake Congressman; fighter for liberty; the champion of us all!
In the ballad he was the father we all longed for. Could go off and do his business (in reality the world war) but still come:
Home fer the winter with his family, happy as squirrels in the ol' gum tree
Bein' the father he wanted to be, close to his boys as the pod an' the pea
Davy, Davy Crockett, holdin' his young'uns dear!
Buddy Epsen co-starred as Crockett's sidekick and he and Fess Parker toured the United States, Europe and Japan to much adulation. One can only wonder what the Japanese were thinking.
The power of TV, pop music, the myths of America's manifest destiny in the 19th century, mass marketing, a tsunami of disposable income, easy travel, and the new spirit of the suburbs all moshed together to create a cultural phenomenon.
Crockett was the subject of the 1909 silent movie, In Hearts United, that began the frontiersman's rise to heroic stature after 70 years of relative obscurity. Crockett has since been played by John Wayne, Brian Keith, Johnny Cash, and Billy Bob Thorton among a score of others.
Parker was literally an accidental actor. He was playing college football in Abilene in 1946, when a near fatal road rage knifing incident cut short his athletic career. (He was 6'6" and weighed 240.) A half dozen years later, he landed a bit part in Springfield Rifle starring Gary Cooper. He also had a brief, but riveting appearance in the chilling movie Them, the role that brought him to Disney's attention.
What made Davy Crockett so appealing aside from his shootin' and fightin' was an almost supernatural sense of humor that Fess Parker brought to life for the kiddies. This sprang directly from the real-life Crocket, who, according to his hagiographers, was quite the backwoods humorist.
Supposedly he said in a speech to Congress:
I'm that same David Crockett, fresh from the backwoods, half-horse, half-alligator, a little touched with the snapping turtle; can wade the Mississippi, leap the Ohio, ride upon a streak of lightning, and slip without a scratch down a honey locust.
Most famously he said: Always make sure you're right, then go ahead.
As kids, we picked up on that comic vibe, bending the words to Davy's ballad so they were sung as "Killed in a bar when he was only three..."*  Looking back, it was a portent of what would come in the blithely anarchic 60s.
Somewhere out there is a land... 20 or 30 miles from the heart of old American cities. The houses are new, the trees are recently-planted little stalks. Maybe the landscaping hasn't been quite finished yet, a barbecue is grilling, children are shouting, the Alamo is a pile of dirt. It was the greenest state in the land of the free. It was the frontier of the 50s.
* Real lyric: Kill't him a b'ar (bear) when he was only three.