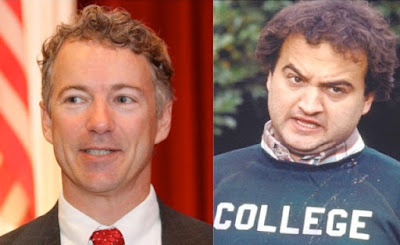 Rand Paul's scurvy view of how the Federal Government should interact with private business on racial matters is not the only danger associated with the cruel, demented politics of Kentucky's Republican Senate candidate.

Dating back to the 1850s - almost 160 years ago now - progressive ideas entered mainstream American political currents. (In 1852 Massachusetts passed a law making it mandatory for children to attend school, the opening bell for a century and a half of government activism.)

The progressivist Abolitionist Movement of the 1840s and 50s culminated in the Civil War of course, which Libertarians, radicals all, would not have brooked.

And, the grand sweep of the 14th Amendment would be nothing but a ghostly promise in Paul's haunted American house. Due process? Forget about it.

Rand Paul and his war-of-all-against-all fellow-travelers would have none of this government activity if elected in 2010.

I wish this were an exaggeration, but everything from racial equality to women's rights to pure food and drug laws would be swept away by the Libertarian lunatic fringe. The Interstate Commerce Act, Sherman Anti-Trust Act, wildlife conservation and land preservation, unionization, the building of railroads and the interstate road system, public transportation, the space program, pollution control, regulation of dangerous narcotics, the prohibition against selling alcohol or tobacco products to children, and a thousand other activities our governments regulate - they too would be swept away.

One can see this philosophy virulently at work in the Libertarian Supreme Court's Citizen United v. Federal Election Commission decision this past January. It gives businesses license to buy elections, pure and simple. They can fly the flag of "Free Speech" all they want, but it's flying over a parade designed to work against the individual work-a-day citizen's true interests.

Rand Paul's is not the philosophy of a man running for high office but running for the position of top dog in the bull sessions of a right wing frat house.

His (lack of) thinking comes to us draped in the regal robes of fiscal responsibility and in expensive suits, when indeed such thinking is an impish child born on a beer-sticky floor during a farting contest.

Paul would thrust us all into an Animal House of ethnic hate, filthy air and water, child neglect, drug and alcohol abuse. Laws? Who needs 'em as long as the budget is balanced.

Here he comes, Rand Paul, selling his medicine show swill to the people of Kentucky, a poverty-stricken state sorely afflicted by environmental devastation created by the coal companies who have also had the good conscience to bust the people's unions as government stood aside in Libertarian glee.

Kentucky has the highest cancer rate in the country.

Kentucky is the state with the highest proportion of adults under 65 without teeth.

It has an adult illiteracy rate of about 40%.

Kentucky ranks 47th in the nation in percentage of residents with a bachelor's degree.

Kentucky's ground water upon which a great majority of its citizens rely for drinking ranks last in the United States for purity.

All this Rand Paul and his non-compassionate cohorts vow to stand aside and watch.

As the old bumper sticker said: The Moral Majority is Neither.
.
Posted by RDL at 10:55 AM