Three of the adjectives that the Presidential Commission that investigated the murders on an American college campus four decades ago.

"We're going to use every weapon possible to eradicate the problem." - James Allen Rhodes, Republican Governor of Ohio, speaking at a news conference on May 3, 1970.


I wanted to say something very new and trenchant about the Kent State University shootings 40 years ago that today we commemorate. I wanted to link the extremism now afoot in America with the right wing extremism that stalked our country in the 1960s and 70s.
Yet, when looking through the Internet photo archives of the murders, unexpectedly, two banal things struck me.

The first is that there are very few color photographs of Kent State that day - most of the iconic images are in black and white, lending an antique sheen to the day. The second observation seems even more ridiculous. 99% of the students were thin. Very thin.
Many people of a certain age when transported back to that murderous moment in time find that the memories still evoke surprisingly powerful emotions. Anyone of college age then, or a few years older or younger, had already had their "coming of age" marred by the assassinations of John Kennedy, Martin Luther King, and Bobby Kennedy. Even the assassinations of polar political personalities Malcom X and George Lincoln Rockwell, founder of the American Nazi Party, had impressed their memories upon us. It was an decade of violence.

But the killing of everyday kids - people just like us - first at Kent in Ohio and then at Jackson State in Mississippi ten days later was shocking beyond belief. Nine others were wounded, one paralyzed for life. Worse, two of the dead victims were innocent bystanders, going to classes or milling about to watch the main event, when the Ohio National Guard reversed field, turned and fired 67 bullets into an unarmed crowd in the space of 13 seconds. A 1970 FBI investigation into the shootings found that the guardsmen were not in danger and that they "fabricated" this defense.
The demonstrations, the troops, the fresh, raw anger are all long gone. Where anti-war protests raged, today a granite plaza invites peaceful reflection. On the spots where four young people fell in a spray of National Guard bullets, lanterns stand in remembrance.
What kind of country shoots down its unarmed youth in cold blood? Is it the same country that spits on Congressmen or calls them by racial epithets? Or reviles the first President who isn't white? The strain of vile hatred by rightist, reactionary forces has a long and persistent presence in our nation's history.
Does not wisdom cry? (Proverbs 8:1)
You used to be a student.
The murdered students 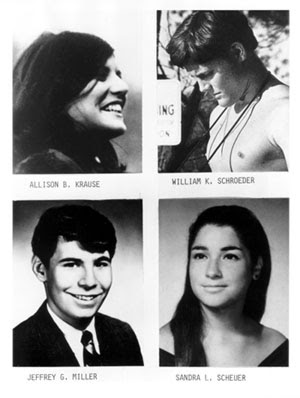 The Guardsmen Killing Them 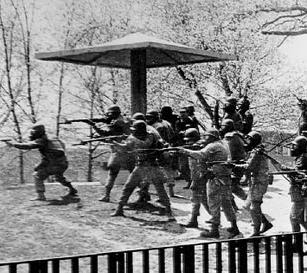 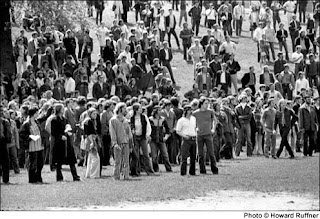 A Wounded Student Attended To By His Contemporaries 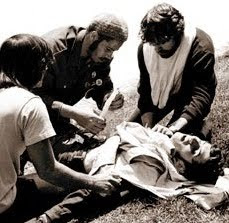 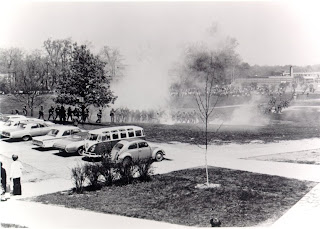 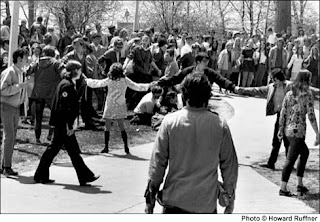 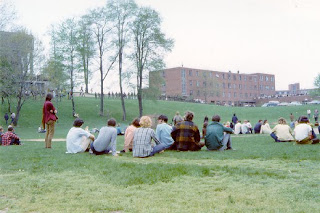 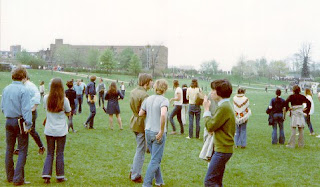 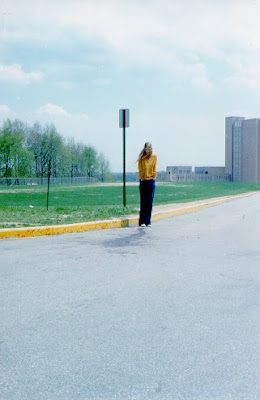 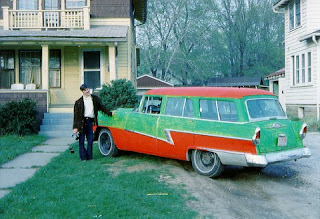 Dean Kahler, one of the wounded, has been in a wheelchair ever since 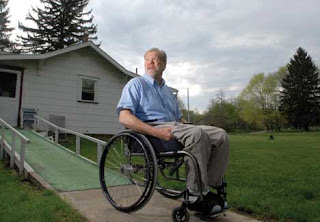 Memorial for Jeffrey Miller, one of the four students shot in 1970, photo taken September, 2009, in Kent, Ohio. 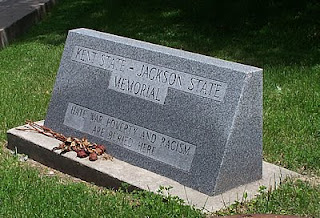