The arguments about the Vietnam War will be with us until the last of the Baby Boomers die off in the next 30 to 40 years or thereabouts.

Connecticut's Democratic senatorial candidate Richard Blumenthal has clearly lied about his participation in the undeclared war. (We haven't had a declared war since WWII.)

The question remains, why would a person, almost 40 years after the end of a conflict that tarnished our moral standing in the world, feel compelled to lie about his service in it?

Pictured below is the 1968 My Lai massacre in which somewhere between 350 and 500 Vietnamese civilians were murdered led by William Calley-Charlie Company, of the 1st Battalion, 20th Infantry Regiment, 11th Brigade, 23rd Infantry Division. 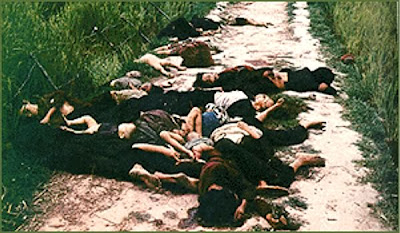 The BBC described it this way:

Soldiers went berserk, gunning down unarmed men, women, children and babies. Families which huddled together for safety in huts or bunkers were shown no mercy. Those who emerged with hands held high were murdered. Elsewhere in the village, other atrocities were in progress. Women were gang raped; Vietnamese who had bowed to greet the Americans were beaten with fists and tortured, clubbed with rifle butts and stabbed with bayonets. Some victims were mutilated with the signature "C Company" carved into the chest. By late morning word had got back to higher authorities and a cease-fire was ordered. My Lai was in a state of carnage. Bodies were strewn through the village.

In eyewitness testimony during an initial Peers Inquiry, one soldier testified:

He fired at it [the baby] with a .45. He missed. We all laughed. He got up three or four feet closer and missed again. We laughed. Then he got up right on top and plugged him.

The Vietnam War dehumanized two peoples, Vietnamese and American; for, while the United States had no rational reason for being in Vietnam and committed heinous crimes against humanity, neither the Vietcong nor the North Vietnamese behaved humanely either.

One can understand past generations wanting to wear the mantle of service in World Wars I & II. But Vietnam?

Exactly what part of the war does Blumenthal want to lay claim to? Something beyond the ribbons and medals - but what?

The burning of villages inhabited by peasants living in near Medieval conditions? The carpet bombing of huge swaths of Indochina? The virtually unopposed high level bombings of Hanoi and Haiphong?

Perhaps Blumenthal would like to embrace the use of Agent Orange and other defoliants. Or the secret war in Cambodia that tore America apart in disturbances that culminated in the murders of a dozen young students around the country? Could it be he wanted to join in a whole generation of kids who came home with drug and alcohol monkeys on their back?

Bodies of dead Vietcong pictured below. This is what you missed, Mr. Blumenthal. A death machine that had no purpose except the cynical exercise of power visited by a huge country upon a small, struggling one. Everyone was born of a revolution. Ours started in the 1770s, theirs in the 1940s. 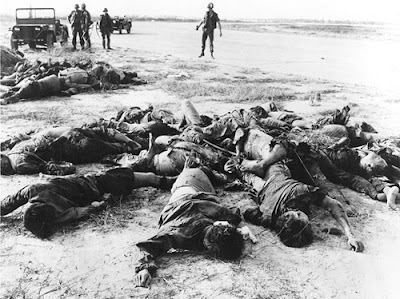 I am proud to this day that my compatriots and I energetically opposed this madness.

I'm waiting for the Boomer politician who will have the guts to stand up and say he is as proud as we are to have been in patriotic opposition to the mass derangement that was the Vietnam Era.
Posted by RDL at 12:27 PM