(See video at end of post)
On February 18, the New York Times published a profile of urban sociologist, Sharon Zukin, a professor at Brooklyn College. (link) As many of us do, Professor Zukin decries the passing of neighborhoods with special charm and character. But Zukin is wrong; they have not passed. They have moved to northern Manhattan, the Bronx, and countless neighborhoods in Brooklyn and Queens.


Behind the picturesqueness or lack of same, however, comes a portrait of the new ethnic individual, however. A majority are working class, but they are not employed in manufacturing since New York's factory world has been disintegrating since World War II. Now there are less than 100,000 manufacturing jobs here, a loss of 1,000,000 since 1942. 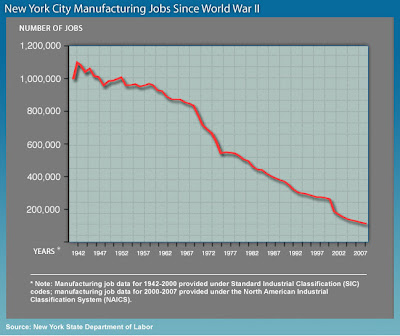 The European-American, hearty lunch-pail image of the New York that we know so well from movies like On The Waterfront and The Naked City is gone for the foreseeable future.
30% of people with less than a high school diploma who are employed at all, work in manufacturing. The remaining low skill workers toil in the food service industry, retail, and menial labor jobs. Since manufacturing jobs traditionally pay more than those other categories, this does not bode well for us. The difference, once upon a time, between a white collar professional and a skilled blue collar worker was largely a matter of luxury income. Now the chasms are gargantuan. (The blue collar workers of the building trades, and the light blue collar telecommunications and health care fields somewhat ameliorate the situation.)

Is the flavor of Manhattan below 110th Street becoming Walmarted? It surely is. Can that be governed? Probably not. The chaining of America is not a micro, but rather a macro trend.


To recreate the faded industrial era, one would have to bring back the garment industry that once made 70% of all women's and 40% of all men's clothing in the country. Or bring back the dozen and a half big breweries from Rupert's to Rhiengold's to Lion's. Or the slaughterhouse and meat packing business. And shipbuilding, brick making and railroad tie making.