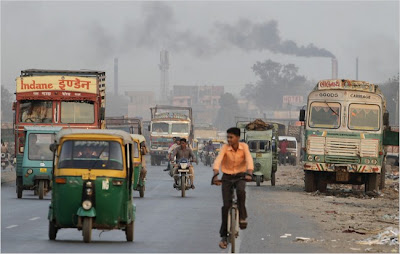 Around 1990 my wife became editor of Columbia University's Environmental Law Review and global warming popped up on my personal radar. Almost immediately, she and I came into conflict over this issue, even though we are both fervent environmentalists.
I insisted that people cannot and do not want to wrap their minds around the Apocalypse, especially if they won't be able to drive to Armageddon.

Being more technocratically inclined than I, she insisted that education on the subject would change that. What sane person would ignore the facts?
That was 20 years ago and in our righteous passion, we liberals have wasted two decades of trying to convince the dim-witted, uneducated, science-resistant and self-absorbed American public that global warming is 1) a reality and 2) a menace to the planet. Too bad. Time is money.
All consumers - in this case consumers of information - need to be sold the benefits of a clean environment. If a consumer is told carefully and repeatedly that the warming of the atmosphere is dangerous, his or her first reaction is "When?" Second reaction is "Where will these changes occur? Near me?" Their third reaction is most likely "Tilt. I can't do anything about it anyway. Problem's too big."
In a country where half the population believes the earth and all its creatures were created in a 7-day week about 10,000 years ago, global warming and necessary remedies simply won't sell. Moreover, the focus on global warming conveniently tosses all notions about the immediate dangers of air, water and soil pollution to the side of the road.


For instance, a Stanford University study shows that in the U.S., solely because of excess CO2, there are 2,000 excess deaths every year.* Total deaths from pollution in the U.S. number in the hundreds of thousands, hovering close to 1,000,000. And ocean chemistry is being radically altered by CO2 (and other pollutants) to such an extent that the fish and marine life population is beginning to suffer so severely that by the end of this century essentially we will see the end of natural populations of all food fish.** (*Mark Z. Jacobson (Stanford University). On the causal link between carbon dioxide and air pollution mortality.  **James Zachos, University of California, Santa Cruz, and Toby Tyrrell, Southampton University, U.K.)

In fact, scientists now overwhelmingly agree that about 40% of ALL deaths in the world can be attributed to pollution,
So, what has marketing got to do with it? Simple. Passionate, convinced environmentalists have to stop selling the Apocalypse and start selling the cost benefits in the here and now. Stop selling the steak and start selling the sizzle.
The sizzle may be the decline in the daily catch and consequent rise of fish prices. It may be the increased cost burden of medical care or life insurance. It may be the decline in productivity and wealth due to lost days of work. It may be the cost of re-painting a house every 6 years instead of every 10. It may be appealing to patriotism by persuading people to get off the junkie's addiction to foreign oil.
The average American thinks in the concrete, not the abstract. There are literally hundreds of reasons why we should have a cleaner environment. Global warming is the overarching one, but it just ain't selling. (Think this way: Toothpaste Brand X has decided brighter teeth is its position. But the company discovers through research that people care more about fewer cavities and fresh breath. Well? Do you keep advertising brighter teeth?)
In marketing there are a number of terms that drive the thinking before the actual message - a TV commercial, for instance - is born. Let's suppose that our company is Clean Environment, Inc. Our products are good healthy air, water, and soil. A strategy is needed.
Strategy is how a brand or product line will achieve its objectives. The strategy provides decisions and direction regarding variables such as identification of the target market, the segmentation of the market, positioning, marketing mix, and expenditures of time/money/energy. Tactics address the "how." Do we use, aside from the usual media mix, premiums or incentives like tote bags or a free vacation, a club, initiatives in schools and churches; is the campaigning seasonal or year round? Message: We are off message on the environmental issue. Off the top of my head I'd say there are a few catch-words that need to be employed as if they were Holy Writ: Cleaner, Cheaper, Children, Country, God.
More on this to come.
Posted by RDL at 10:43 AM