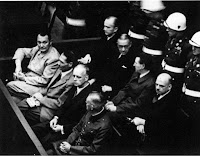 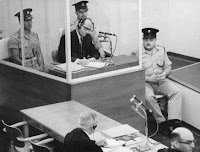 There can be no greater argument for holding the imminent terror trials in a fair, transparent setting than the two photographs in this posting, the top from Nuremberg, below from Jerusalem.

These barbarous men, instruments of evil during the Nazi era, were responsible for the deaths of tens of millions of people and property destruction the likes of which the world had never known, and has not known since. Many of these deaths were not part of the so-called normal course of war, but systematic terrorist acts against helpless civilians.

Yet, in front of the whole world, they were put on trial, evidence was brought, weighed, deliberated upon, and sentences passed. It would have been easier to summarily shoot these fiends, but then billions of eyes would never have seen, billions of ears would never have heard of the scale and scope of their monstrousness.

I don't argue for holding the contemporary terror trials in either civilian or military courts, nor do I argue for lower Manhattan versus a secure military base. The cost of the Manhattan scenario seems repellently high, on the order of $1 billion+.

Regardless of venue, I do argue for the same complete transparency that Nuremberg and the Eichmann trials gave civilization, two complicated acts of juristic courage that will color history forever.

The terror trials should be wide open to the press from all corners as were the World War II trials: 250 journalist covered Nuremberg, 500 Eichmann's.

Eichmann's was the first war crimes trial to be treated to full television coverage. For those of us old enough to remember, he was the Man in the Glass Booth, flickering across the airwaves, a sinister manifestation of a past we knew only in legend.

From where does the argument come to make Khalid Sheikh Mohammad and his devilish brethren "Men in Concrete Bunkers?" From the right wing, naturally.

Senator Lindsey Graham, an extremist Republican who wants the trials to be held away from the eyes of journalists, said disingenuously today: "These Al Qaeda terrorists are not common criminals." Thank you for that sunning insight, Mr. Graham.

In comparison to Goering, Hess, Ribbentrop, Speer, Neurath, Fritzsche, Bormann, Eichmann and the rest of the devil's disciples?The radical Sheikh is a two-bit murderer who should at least get a clean undershirt for the trial.

In a mere 10 months, the Nuremberg trials dealt with six years of war crimes and 21 accused. For all the complaints at the time of "victors' justic," the trial was astonishingly fair to the accused, with three being acquitted. Eichmann's trial was short, as well, although appeals put off his death sentence for a year after the trial.

Keep the trials open, well-covered by all members of the press around the planet, hold dear to our system of openness and fairness. Let the Republican radicals understand that vengeance and justice are two distinct ideas, let the world know that proper evidence has been brought and serious deliberation been made in an open society.
Posted by RDL at 12:00 PM