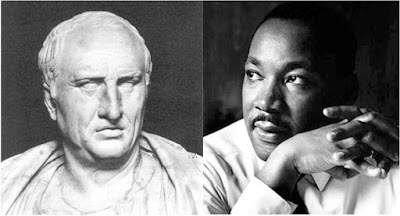 Everyone should be angry, anxious and ready to counter any and all challenges from the extremist right wing after the fear and hatred extravaganza this weekend at the Lincoln Memorial.

The effrontery to the memory of Martin Luther King and all he stands for is self-evident. The insensitivity is beyond calculation. King had a dream. Beck offers America an Ayn Randian nightmare where radical individualism - the worst of Social Darwinism - will rule our lives.

Should the radical right seize much power, from cradle to grave even the well-educated let alone the poor and struggling, will struggle for a shirnking piece of a shrinking pie.

It sounds like hyperbole, but in all seriousness, this right wing is dangerously anti-American. They are the anti-patriots.

Cicero, in the late 1st century B.C. in one of his speeches, said of different traitors in different times:

A nation can survive its fools, and even the ambitious.

But it cannot survive treason from within.

For the traitor moves amongst those within the gate freely, his sly whispers rustling through all the alleys, heard in the very halls of government itself.

For the traitor appears not a traitor; he speaks in accents familiar to his victims,  and he wears their face and their arguments, he appeals to the baseness that lies deep in the hearts of all men.

He rots the soul of a nation, he works secretly and unknown in the night to undermine the pillars of the city, he infects the body politic so that it can no longer resist.

A murderer is less to fear. The traitor is the plague

Speaking of baseness, here are some thumbnail sketches of "Tea Party" type candidates:
According to a University of Washington study, 46% of Tea Party'ers believe "if blacks would only try harder, they would be just as well off as whites." That racist sentiment, held by nearly half of all Tea Party supporters, had already been established by a USA Today poll, and WU study strongly confirmed their findings from July:


Nearly half say blacks lag in jobs, income and housing "because most African Americans just don't have the motivation or willpower to pull themselves up out of poverty."

Over half of all Tea Party'ers believe that immigration (not illegal immigration, mind you) is "changing the culture in the U.S. for the worse" (54%), compared to 32% for everyone else.


When asked if we should single out Muslims or Middle Easterners for airport security stops, 63% of Tea Party supporters said we should, compared to 43% of all voters, a disturbing percentage of all Americans.

Over half of Tea Party'ers believe gays "have too much political power" compared to "the size of their group."
Posted by RDL at 1:51 PM