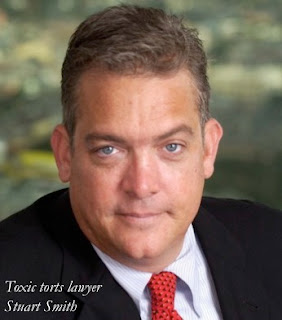 For decades now, the right wing has been ranting about "trial lawyers." The phrase is a code word for lawyers who sue large corporations on behalf of citizens, groups of citizens in class action suits, states and local governmental entities.
The rightist radicals draw a portrait of the lawyers as little more than highly paid ambulance chasers. Is there a seamy side, a parasitic side to "trial lawyers?" Of course. Just as there is a seamy side to practically every profession from the clergy to agriculture to unions.
On the whole, however, the "trial lawyer" is the last line of defense - often the ONLY defense - against the many predatory practices of corporations. Big pharma, agribusiness, energy producers, crib makers, transportation providers, the tobacco purveyors and a dozen others truly fear the "trial lawyers," because they know they are in for trouble once a suit is filed.
One of the most capable and relentless of these tort lawyers, the appropriate term for the job, is New Orleans native Stuart Smith, long a champion against big oil, big polluters in the Gulf. Just one day after the fire and explosion on the rig, Smith was on the case.
"On Thursday, I could smell the oil and, being a toxic tort lawyer, I realized that the fact that you're smelling something means that you're inhaling something," said Smith when breezes were carrying the scent of the oil slick toward his beloved city. Smith, who has sued major oil companies before, immediately contacted toxicologists and air monitors to start doing tests that could be used as evidence. (As reported in the Washington Post.)
Smith believes that if the leak lasts another 2 months or so, the fishing beds and coastline could be ruined for generations. The devastation could cost the Gulf fishing and tourism industries tens of billions of dollars, more money than BP or any half dozen big polluters could pony up.
In 1992, Smith was the first plaintiff’s attorney to take an oil company to trial for damages caused by radioactive oilfield waste. Street v. Chevron pitted the owners of a mom-and-pop pipe yard located in rural southeastern Mississippi against a multinational oil conglomerate. Chevron had sent radioactive oilfield pipe to Street, Inc., for cleaning –  without informing the owners that the pipe contained radioactive material.
Investigators from the Mississippi state Division of Radiological Health found radiation on the Street property 500 times the natural-occurring level. The suit charged that 38 people, not only the owners and workers, but also children and other family members, had “suffered physical and psychological harm because of their exposure to low levels of radiation and that Shell and Chevron should have warned them about the ‘inherent dangers.’ ”
The suit sought $35 million in damages. Shell settled early in the process, but Chevron vigorously defended the case during six months of trial. The oil giant ultimately settled the case for an undisclosed amount of money in what remains one of the longest-running jury trials in Mississippi history. The ruling opened the door to further suits associated with damages from oilfield radiation.
In 2001, Smith and his law partner Michael Stag successfully prosecuted the widely publicized Grefer case. The Grefers sued an Exxon contractor for contaminating their 33-acre parcel of land in Louisiana with TERM (technologically enhanced radioactive materials). After a six-week trial, a Louisiana jury returned a verdict of $1.056 billion against a contractor of ExxonMobil, the world’s largest oil company, in favor of Mr. Smith’s client, retired judge Joseph Grefer.
The court ordered Exxon to pay the Grefers $56 million in compensatory damages, to clean up their land, and slapped the oil giant with $1 billion in punitive damages.
The most insidious side of the Grefer case is that it appears Exxon knew about the radioactive material and did nothing to alert either the Grefers or its contractor. The court stated that from June 1986 to March 1987, “Exxon officials intentionally withheld information,” and that the company “knew the [radioactive] scale [inside the pipes] posed a direct danger to the physical health of those workers.”
Has Smith made great money by bringing these suits? No doubt. But really, what he and others like him are doing is to function as an ad hoc branch of government. And mounting further suits is time-consuming and costly.
Polluters, who could easily be monitored and prevented from polluting, experience very little oversight by government agencies. They pollute, are usually caught, and the government slaps them on the wrist with a wet noodle.
It is left to Smith and other tort lawyers to "prosecute" the cases the government should have prevented in the first place. No one else is protecting innocent victims from the polluters' activities.
Is it any wonder that the right wing boot-lickers want to stringently limit the size of jury awards in cases involving many industries but especially energy? The right would leave us defenseless from the inception of a drilling or digging project through to the inevitable catastrophe created by polluters.
The right would gut current "strong" regulations, see to it there is no funding for policing under remaining flimsy laws often written by industry insiders, and finally do away with the tort lawyers' ability to find recourse for victims and/or the overall commonly held environment.
People like Stuart Smith may be be doing very well financially. Deservedly. Perhaps they are even rich, but they are folk heroes nonetheless.
Smith said: "Oil companies are the meanest, nastiest defendants in the country. They just don't care; they have so much money."
..
Posted by RDL at 10:45 AM