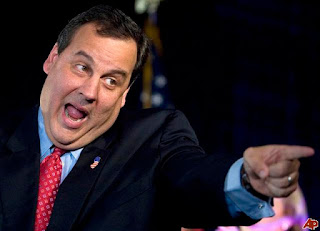 If you were entertaining the cozy fireside notion that there is such a creature as a moderate Republican, slap yourself in the face and wake up. The Party of No Ideas, the Backward-Facing Party, the Anti-People and Anti-Future Party has struck again.

The decision by New Jersey's Governor Chris Christie to kill (for the moment) a new train tunnel that would allow for the doubling of rail commuters into Manhattan from 46,000 daily to 90,000 is both a tragedy and a window into the vision-less soul of the Republican Party.

Christie's pretense is that there would be unacceptable cost overruns, and that the state would have to pony up $3 billion it doesn't have. Both objections are worse than ludicrous whose real motives is supporting the gas, oil and car lobby in New Jersey.

Certainly some cost overruns - whether in the public or private spheres - are the result of corruption. The vast portion of overruns, however, are due to a) changes in engineering specs, b) unforeseen circumstances encountered during the actual build phase, and c) inflation.

Plus, a government doesn't reach into some Brobdingnagian pocket and slap $3 billion on an equally large table and ask for a receipt as if it were paying for a dinner out. It pays over multiple years. In this case, the tunnel project would be spread over a few decades, meaning it would cost the citizens of New Jersey about $20 each per year, about the cost of 7 cups of Starbucks latte.

On the drawing board for almost 20 years and recommended since 1957, the tunnel project, known as ARC (for Access to the Regional Core), has already been started and $600 million already been spent in the initial phases. The canceling of the project will cost 6,000 construction jobs within the year, most of which would have been filled by Jerseyans. It is also projected that over the course of the ten years that would have followed completion, 40,000 additional jobs will have been lost.

70,000 tons of carbon per year would have been removed from the atmosphere because 22,000 cars per day would have stayed in their garages.

The glee with which Steve Carellas, New Jersey's representative to the National Motorists Association,  a group that promotes more driving and is against, among other things, DUI checkpoints and red light cameras, is illustrative of how drugged up the gas and auto lobby is. "Wow! Smart decision," Carrellas said after hearing the news. "We were upset that Port Authority and turnpike tolls went to support the tunnel. Here we have a governor doing exactly what he said he was going to do, and not being taken for a ride."

Neysa Pranger, a spokeswoman for the Regional Plan Association, said Christie’s decision "casts a dark shadow over the economic future of New Jersey." Canceling the project will effectively cost New Jersey homeowners $18 billion dollars. That’s how much home values would have increased as a result of the tunnel’s construction, according to a study by the planning association, based on the impact of three previous rail projects. The study found that the value of homes within a half mile of a rail station would have increased by $29,000, while homes within two miles would have appreciated by $19,000.

On a less dramatic note, the tunnel would have meant that the tens of thousands of people who have to stand during their 50-minute ride into the city would have had seats every morning.

But what is worse is this. Christie and his acolytes believe not in actually saving money, but putting it toward deleterious ideas - like more road building and smaller tolls on the New Jersey Turnpike and Port Authority tunnels and bridges. They will be asking that the original $3 billion federal contribution go toward replenishing the state's bankrupt Transportation Trust Fund. It is not as if they are saying, "Here, Federal Bad Government, take our $3 billion and put it toward paying down the deficit." They are saying, "Give it to us so we can keep more cars on the roads, pollution high, employment low, and retard the future, which everyone knows is going to be based on mass transit."

Why is the trust fund in the nation's most crowded and car-infested state bankrupt? The state government cannot locate the backbone to raise the gasoline tax by 1 penny per gallon. Never mind that New Jersey has the lowest gas prices ($2.63 per gallon as of today) in the northeast and is well below the national average ($2.80).

The tom-tom beats out the refrain: elections have consequences. In this case the election of one short-sighted, poorly-informed man is helping to undermine the most important economic region of the country.